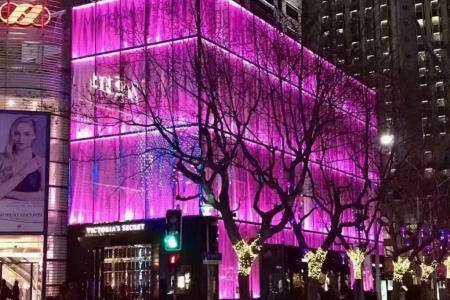 The Ohio, Columbus-based brand opened the Shanghai store to the public on Thursday. Located in the city’s Huangpu district on Huaihai Road, the strip was once known as the ‘Fifth Avenue’ of Shanghai. The arrival of brands like Victoria Secret has city personnel hopeful the street will return to its former retail glory.

The Victoria’s Secret store, together with some other new commercial projects to be launched this year, will reinvigorate the commerce environment of Huaihai Road and help it to restore its former glory.

Owned by L Brands, Victoria’s Secret is ramping up its Asia expansion, eight months after first announcing it planned to officially open standalone stores in China. Accompanying this week’s Shanghai flagship, a 12,294-square-foot store in Chengdu will open Friday, while a Beijing store is coming later this year.

L Brands expects the three China stores to generate $150 million in annual sales, with China expected to equal or even surpass the U.S. in sales in the long term.

According to Euromonitor International, China’s retail market for women’s underwear has seen a compound annual growth rate of 9.7 percent from 2011 to 2016, reaching 139 billion yuan ($20.1 billion) in 2016.