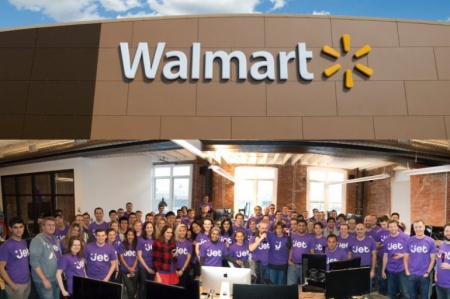 Jet.com has started offering Wal-Mart’s in-house brands including Great Value, Equate and Sam’s Choice now that the companies’ online order-fulfillment centers have been linked up, a spokesman confirmed Tuesday. The move represents a small but significant step toward integrating last year’s $3.3 billion acquisition of Jet.com, part of a push to challenge Amazon.com Inc. in e-commerce.

Walmart.com and Jet.com will continue to operate separate sites and target different customer groups — Walmart.com for the everyday, price-conscious shopper and Jet for more upscale city dwellers, according to spokesman Dan Toporek. Yet in certain cases, “where there are gaps in the assortment,” Jet.com will offer the Wal-Mart store brands. One example would be Great Value organic foods, he said.

The development comes as Wal-Mart’s U.S. online revenue rose by double digits for the third straight quarter, helping results over the holiday period beat analysts’ estimates. The online unit’s so-called gross merchandise value, which includes sales made by third parties on its Marketplace site, increased 36 percent in the period ended Jan. 31. Wal-Mart now offers 35 million items on Marketplace, a quadrupling from a year ago.

Still, e-commerce accounts for only about 3 percent of Wal-Mart’s total
revenue, compared with 11 percent for the retail industry as a whole,
according to Sanford C. Bernstein & Co.

Wal-Mart’s store brands might help. They span a slew of categories, including food, beverage, and health and beauty. They’re typically priced below national brands such as those made by Nestle SA and Procter & Gamble Co., but their profit margins benefit from not requiring any advertising. Wal-Mart’s Ol’ Roy dog food was the first in-store brand, released in the 1980s.

Shoppers sometimes view store brands as independent brands, as evidenced by this observation in Wal-Mart’s 2000 annual report: “The products are so popular, in fact, that suppliers get letters from customers asking why they can’t buy Equate products at other retail chains.” Ol’ Roy — named after founder Sam Walton’s bird dog — has generated more annual revenue than Nestle’s Purina brand, and Great Value bleach outsells Clorox’s offering in some stores.