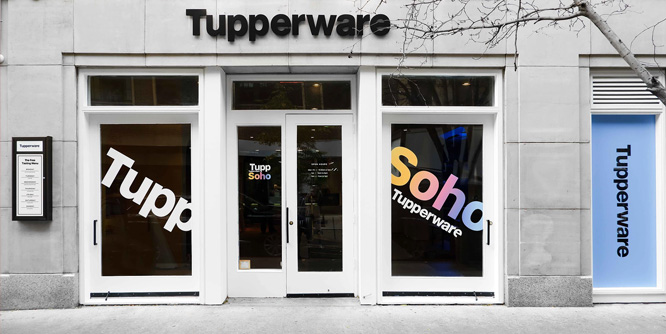 Tupperware opened TuppSoho, a pop-up shop in New York City, which runs through Dec. 22. Guests will be able to attend food and product demonstrations and purchase “exclusive and specially-curated products,” according to an announcement emailed to Retail Dive.

Visitors to the “immersive” pop-up will be able to take photos of (or with) curated walls of product and see new designs and colors up close. Tupperware is also billing its products as environmentally conscious, inviting guests to “gift with a purpose” by shopping products “designed to reduce waste at every turn,” the pop-up website explains.

Tupperware also announced a redesigned website in conjunction with the pop-up. “The opening of TuppSoho marks a monumental point in our brand’s longstanding history. We are giving access to our brand like never before,” Asha Gupta, chief strategy and marketing officer of Tupperware Brands, said in a statement.

Tupperware is hopping on the trend of direct-to-consumer brands opening Instagram-worthy temporary shops with its winter pop-up, although the brand may be more associated with catalogs and parties than with online sales. But the physical space may serve as a reminder to seasonal shoppers that the multi-level marketing company is still around, good for a heaping dose of home cooking nostalgia. 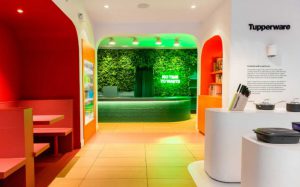 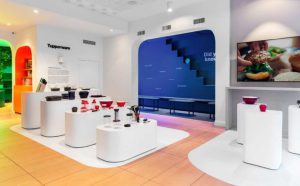 Pop-up shops have long been a means for retailers to get in front of an expanded audience during the holiday shopping season. But these aren’t simply replications of a brand’s online presence — especially for stores that don’t typically have storefronts. Instead, these temporary locations are experiences to be enjoyed and then shared copiously on social media — and they’re cropping up all over the industry.

DTC beauty subscription service Birchbox will put 500 pop-ups in Walgreens stores through the end of December, with limited-edition items and gift sets. Millennial-focused website PopSugar is opening the Sugar Chalet in New York this holiday season, offering meditation and yoga classes and culinary kiosks among an “interactive” holiday market. DSW also announced a New York City pop-up that will run in December; instead of selling any product, it’ll focus on the company’s philanthropic efforts.

But brands don’t just choose a random neighborhood in which to plunk down a pop-up shop. The SoHo shopping district has become a hub for such events: Plus-size apparel company Eloquii hosted its first New York pop-up last year in SoHo, which was chosen in part by customers who said it was their “dream shopping location” in the city. Rihanna’s Fenty opened this summer in the same neighborhood. At the same time, New York City has been hit particularly hard by the so-called retail apocalypse, with its empty retail space doubling in the past decade.