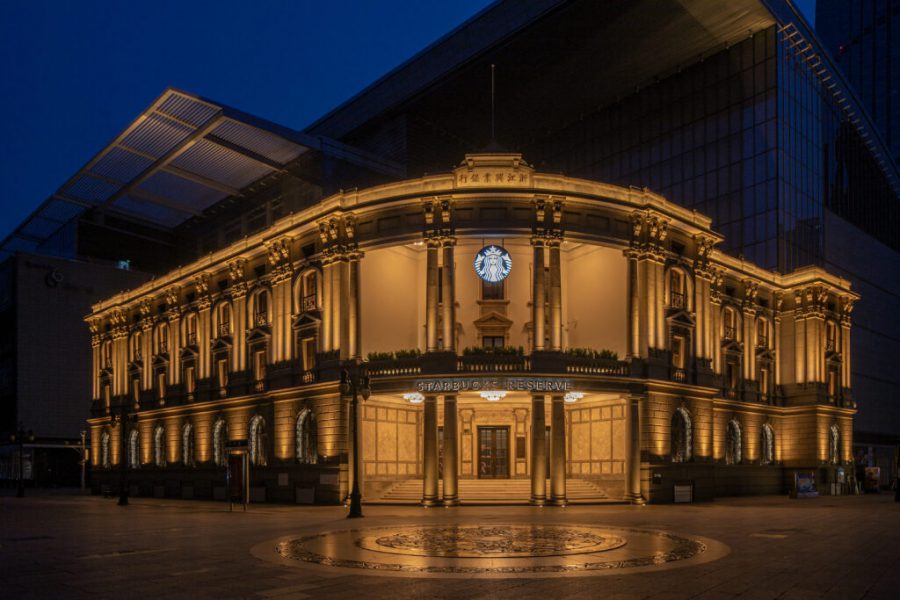 Starbucks unveiled its flagship Reserve store in Tianjin, China. Located in Riverside 66, a Renaissance-style building constructed in 1921, this flagship store reimagines a nearly century-old heritage building to create an inspiring Third Place experience where history is brought to life and enriched with Starbucks coffeehouse culture.

“Over the past 20 years in China, Starbucks has constantly pushed to innovate and reimagine the Third Place experience, to bring people and communities closer together,” said Leo Tsoi, senior vice president, chief operating officer and president, Starbucks China – Retail. “We are immensely proud and privileged to preserve a revered piece of history that binds together four generations of Tianjin residents, and to share this rich cultural inheritance with more people, passing it on to future generations.”

The Starbucks Reserve Riverside 66 Tianjin flagship store demonstrates Starbucks leadership in retail innovation and sets new standards in store concept and design by combining deep history with an entirely modern third-place experience for customers. For the first time in Tianjin, it features Starbucks Bar Mixato and Starbucks Teavana Bar, on top of its Starbucks Reserve offerings that reflect the company’s commitment to elevate and deliver an exceptional in-store experience while creating distinct, new Starbucks occasions in China. 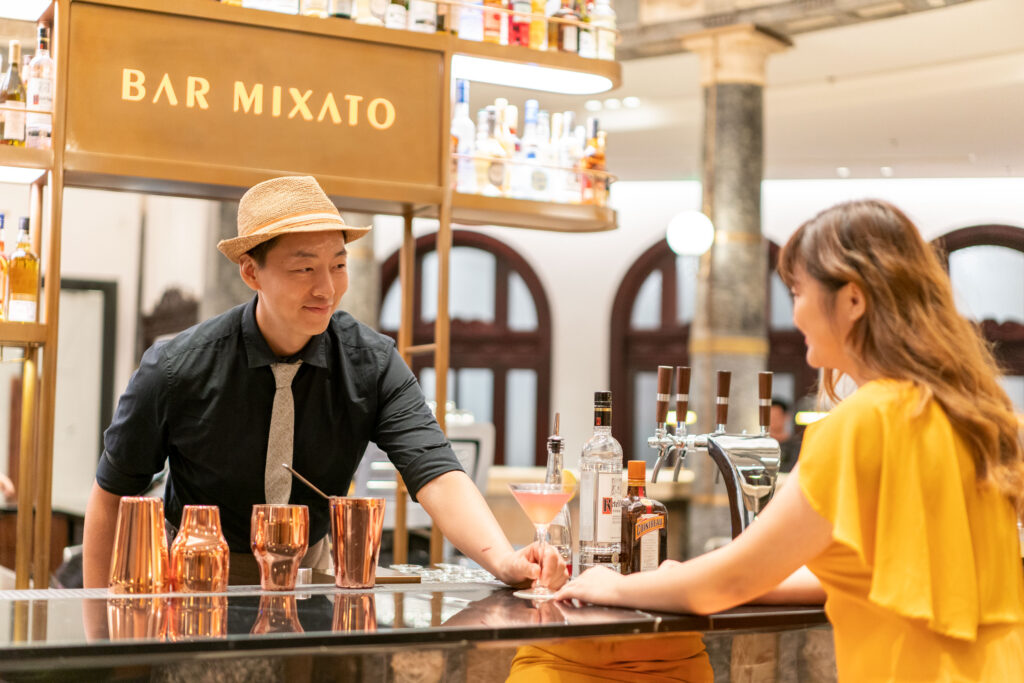 Located in Tianjin’s leading commercial street, the building holds a special place in the hearts of local residents as an iconic city landmark that was a witness to key eras in modern Chinese history. Designed by Shen Liyuan, who was among the first pioneers of Chinese architects to study overseas, it housed the Zhejiang Xinye Bank till the early 1950s, and was a symbol of the city’s economic prosperity and development. In the 1980s, the early days of China’s economic transformation, it reopened as the high end Yongzheng Tailor Shop before becoming the Xinye Foreign Trade Mall. The location was officially designated as a city heritage site in 1997 and has been left vacant for the past two decades – a cultural gem waiting to rediscover its glorious past.

Driven by the passion and responsibility to revive this rich cultural heritage, Starbucks took on an unprecedented challenge to preserve the building’s original architecture and to restore the landmark to its full splendor, while infusing modern, creative elements that complement and give new life to the space. Working in collaboration with local historic preservation experts, it took three years of relentless effort by passionate Starbucks partners to navigate technical complexities and realize the vision for this ambitious project. 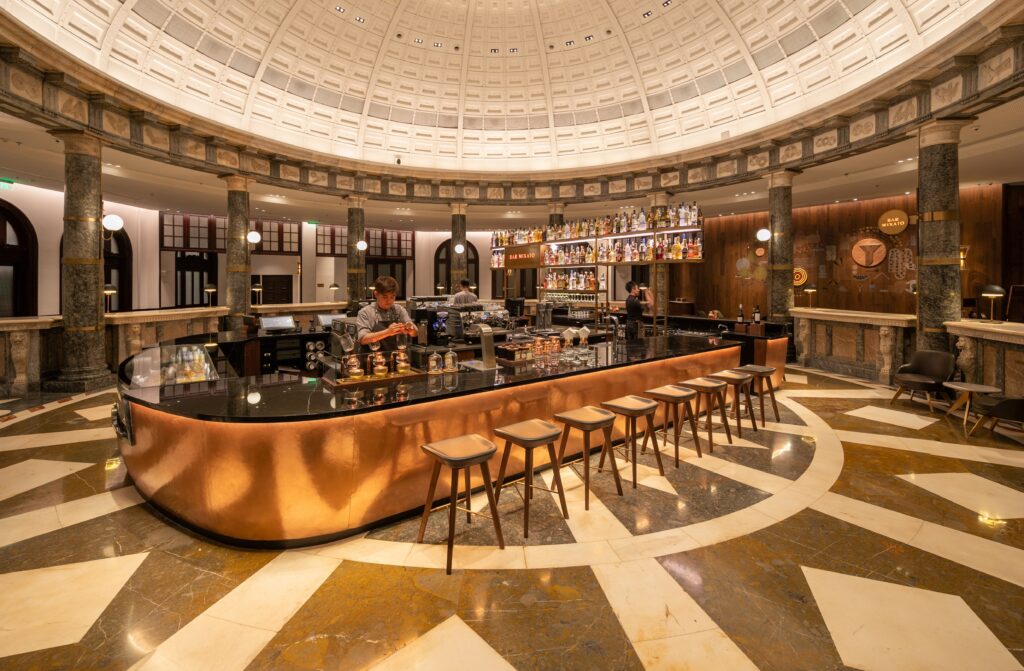 Customers can now admire up close the exquisite craftsmanship and grandeur of a bygone era, which include a majestic Greek style exterior façade and aesthetically breathtaking interior decorations, most notably a glass dome, imported marble columns and marble carvings. The original bank counters have also been fully preserved, allowing customers a peek into what a bank from a century ago looked and felt like. Meanwhile, creative use of bronze tubes ensured that no nail had to be struck into the columns when lighting was installed. Lighting and air conditioning systems were also ingeniously embedded into the glass dome.

“Beyond preserving the century old architecture in its fullest form, the Starbucks flagship store has also made creative use of its unique features,” said Mr. Luo Shuwei, famous historian and senior researcher from the Tianjin Academy of Social Sciences. “Starbucks partners have shown great passion and dedication to ensure that every design detail is in harmony with the original architectural style, to create a warm and welcoming ambience that is also filled with history.” 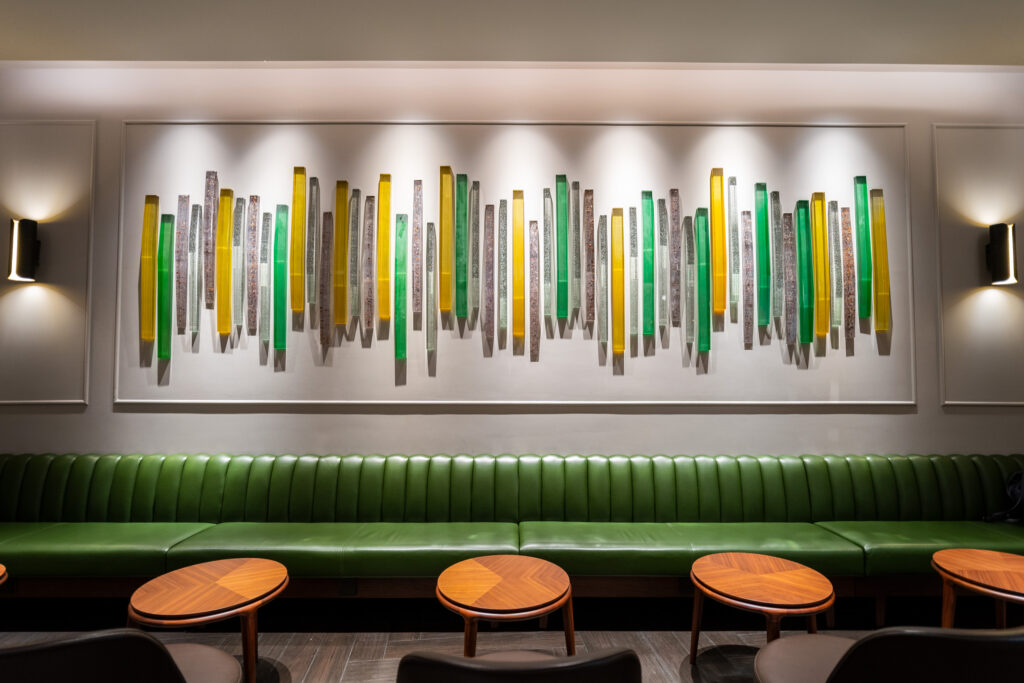 At the center of the main hall is a U-shaped Reserve Bar, where well-trained, certified Starbucks baristas expertly craft Starbucks Reserve coffees using different brew methods and equipment, such as the Siphon, V60 and Black Eagle. Customers may taste the extraordinary flavors of some of the world’s rarest, most exalted and most sought-after small-lot coffees – selected from more than 250,000 cups evaluated by Starbucks team of expert tasters every year, and roasted with meticulous care in the Shanghai Roastery. Often coming from remote and rugged places, with limited harvests from lots as small as a family backyard, each Starbucks Reserve coffee has its own story to tell, with different factors like soil, temperature, elevation, and the amount of rainfall and sunshine making each coffee unique.

The flagship store also features Tianjin’s first Bar Mixato and Starbucks Teavana Bar. The premium Teavana Bar reimagines a modern tea experience, while demonstrating deep respect for thousands of years of tea tradition. It features beverages crafted using extraordinary ingredients in ingenious ways – customers may enjoy nitrogen infused teas, and the visual intrigue of the Steampunk brewing system, along with quality, brilliant tea leaves, blends and botanicals. A tea room is located at the far end of the bar, where customers may have a cup of Starbucks Teavana tea while appreciating a tea inspired painting, a combination of tea and art to delight all senses.