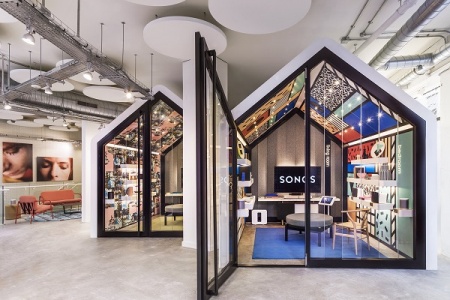 Speaker company Sonos is opening a new store in London’s Covent Garden on November 16 in a bid to push its new Sonos One smartspeaker ahead of the Christmas sales rush.

The store, located just off Seven Dials at 21-23 Earlham Street, is a 2,500 square metre retail unit with two “listening rooms” that have been designed to reflect people’s homes by Sonos sound experience leader Giles Martin.

The London Sonos concept store is the best way to discover, experience and shop for Sonos

The store was designed to replicate the home environment and demonstrate the importance of listening to music out loud.

The Californian speaker company has only opened one other store of its own to date; it’s in New York City and it’s been in operation for about a year.

The London store — in one of London’s busiest shopping districts — is “relatively minimalist,” according to Sorge Titmus, who said Sonos is also planning to open a store in Berlin early next year.

Rivals like Bose or Bang & Olufsen also have their own stores in London and other cities around the world. Bose has a store on nearby Regent Street, for example, while Bang & Olufsen has one in Marylebone.