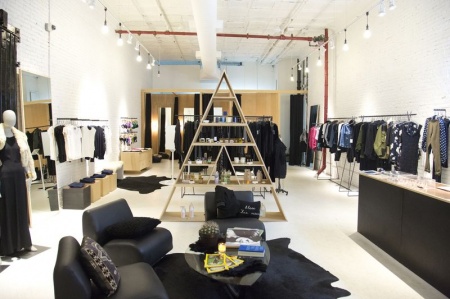 Reformation, every minimalist cool-girl’s source for eco-friendly fashion that’s actually fashionable, has built up quite the loyal following with three locations in New York and LA.

While the brand has spent the past few years growing the e-commerce side of the business, Reformation is now looking to expand with brick-and-mortar: This fall, the fashion company is opening its first new retail location in four years in San Francisco’s Mission district.

“San Francisco is our third biggest online market in the U.S. after New York and LA,” founder Yael Aflalo said by phone. “Which I was really happy and a little bit surprised about.”

Though it’s a relatively small city, Aflalo theorized that SF is such a big online market because it’s a tech-friendly town, and shoppers there might be more likely to buy clothes online.

She also suggested that the reason New York and LA are her biggest markets is because there are retail locations in those cities. “You start to try on the clothes, you become acclimated with the brand, and then you go online and maybe find something else,” she explained.

Reformation launched in 2009 with a small collection of re-worked vintage clothing, and quickly became a cult favorite for its impeccably tailored, retro-meets-modern designs.

Flash forward seven years, and the brand has completely blown up. Rihanna shops there, as do Taylor Swift and Lena Dunham. Karlie Kloss is an investor.

The success isn’t just thanks to celebrity buzz. Aflalo and company have developed a unique model of sustainable fast fashion — according to the brand’s website, a dress can be ready to hit stores a mere month after it’s been sketched — without taking any shortcuts on quality or fit.

Back in 2014, the New York Times reported that Reformation had almost tripled their revenue from the previous year. But the brand hasn’t opened or expanded a retail shop since its Soho flagship opened in 2012.

“As the volume increased, the customer experience sort of deteriorated. I don’t know if you’ve been to our store on a Saturday, but it’s a mad house,” Aflalo said.

While a small boutique with seven dressing rooms might have worked for a vintage-inspired dress shop, it doesn’t work for modern day mega-brand. And at a certain point, you can’t just keep adding dressing rooms.

About a year ago, the team started working on a new store concept to work around the volume problem. They came up with a new floor plan and a custom technology system. And San Francisco seemed like the perfect place to try it out.

“We actually did a sample sale there a year ago to test San Francisco,” Aflalo said. “It was incredible. We had such a crazy-good response. And I think the community there is so receptive to new ideas, and especially new ideas involving technology.”

As to whether the new tech system will in fact be a game changer for shoppers or another interactive dressing room like those we’ve seen from Ralph Lauren or Rebecca Minkoff, we’ll have to wait and see.

When pressed for more details on exactly what we’re talking about here, Aflalo stayed mum. “It’s a new thing,” she said. “It’s something that we haven’t seen in clothes before.”

If it works, Reformation fans in other locations can expect to see the same concept rolled out across all of the brand’s stores — including additional brick-and-mortar locations in 2017 and beyond.

“We really want to open up new stores,” Aflalo said. “I think there’s this whole thing that’s like, ‘oh stores are dead, it’s all about going online’. But I like going shopping. I like walking into stores and browsing. I think there’s something so important about that.”