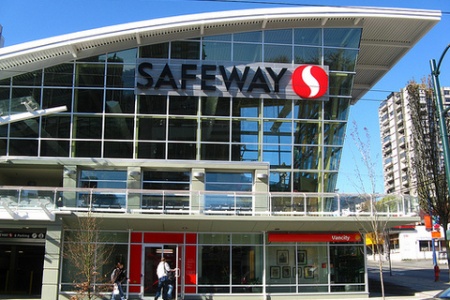 Empire Co., the parent of the Canadian grocery chain Sobeys, plunged to its lowest in more than three years after posting a C$942.6 million ($725 million) quarterly loss amid weak sales in the western part of the country.

Shares of the company tumbled 10 percent to C$19.51 at 1:46 p.m. in Toronto, the most since March 10 and the lowest level since January 2013, according to data compiled by Bloomberg. The Stellarton, Nova Scotia-based company is down 24 percent this year, one of only two decliners and the worst-performer in the 11-member S&P/TSX Consumer Staples Index.

Empire’s same-store sales fell 1.8 percent in the quarter that ended May 7 as the Safeway chain struggled. The deteriorating results in the western provinces, which have been hammered by the oil price slump, prompted the company to take a C$1.3 billion impairment charge, according to a statement released late Tuesday.

“We would describe the quarterly results and the surrounding disclosure as disappointing,” Peter Sklar, Toronto-based analyst at BMO Capital Markets, said in a note to clients. The adjusted fully diluted earnings of 35 Canadian cents per share were below his estimate of 37 cents, he said.

The quarterly loss is the second straight and the first back-to-back in Bloomberg data to at least 2005.

“Management is also seeing early evidence of a softening sales trend in other regions of the country,” Marc Poulin, chief executive officer, said in the statement. Excluding fuel sales and the negative impact of Empire’s western-Canada business, same-store sales would have increased 0.2 percent.

Sobeys boosted price-promotions in the third quarter to compete with discount retailers including Loblaw Cos.’ No Frills stores and Walmart Stores Inc., and customer reaction been so far been disappointing, Poulin said.

“People are looking at pricing even more than usually,” the CEO told analysts in a conference call Wednesday. He said the company is working on structural changes that could take several years to implement, including adjusting pricing schemes and revamping stores.