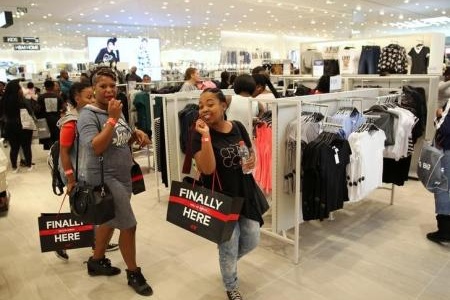 The Mall of Africa will house over 300 shops, including global brands such as Inditex’s Zara, Hennes & Mauritz (H&M), Cotton On and Starbucks. They want to attract the rising number of young consumers in Africa’s most developed economy which has thrived on demand for commodities.

But the opening comes as the outlook for the economy worsens with rising interest rates and prices putting a squeeze on spending while demand for exports such as gold and other metals is depressed. Political uncertainty has also unsettled the rand currency, making imports more expensive and investors nervous.

Retail sales have stayed robust, however, comfortably beating expectations in February and retailers at the mall were in an optimistic mood.

“We see a lot of potential in South African and in Africa… this is our third flagship store that we have opened in a matter of six or seven months,” said Amelia-May Woudstra, the public relations country manager for H&M South Africa. “We will be opening three more stores towards the end of the year.”

Shiny malls have sprung up throughout South Africa, creating thousands of jobs. But they come amid a backdrop of rising debt levels. Nearly half of all credit-active South Africans, or 9.9 million people are overindebted, according to debt counselling firm Debt Rescue, and the number will swell as interest rates and inflation rise while the economy slows. Retail sales grew by 4.1 percent year-on-year in February, but are expected to slow.

The Treasury expects the economy to grow by 0.9 percent this year, down from 1.3 percent in 2015 and the central bank is expected to raise interest rates further to rein in inflation that has been driven higher by wage hikes, a depreciating rand and surging food prices after the worst drought in decades.

The bank has raised benchmark lending rates by 200 basis points in the last two years and analysts see rates rising even further by year end from 7 percent now.

“Interest rate hikes and slower salary increases will limit the employee’s ability to spend. This is bad news for large item sales like cars and furniture. It is likely that retailers will struggle for real growth in the next few months,” said Mike Schüssler, chief economist at Economists.co.za.

This could be bad news for malls such as Mall of Africa, set in the sprawling Midrand suburb housing many of South Africa’s newly middle-class black consumers around 20 km (12 miles) away from its nearest upmarket rival.

“The good malls will do well but there is a risk that there has been a little bit of over building in South Africa. There is a lot of property retail space in South Africa. Is there really another mall that size required in South Africa? I am not sure,” Portfolio manager at Gryphon Asset Management Reuben Beelders.

But with more mature markets slowing, retailers are on the hunt for anywhere offering a faster return.

Zara opened its first store in South Africa in 2011, followed by Australian no-frills chain Cotton On, Britain’s Top Shop and Forever 21 and more recently H&M. Cotton On said on Thursday South Africa was the group’s fastest growing market globally and aims to double its business in the country over the next three years to 350 stores. “Our South African operations have reported double-digit growth every month since opening our first store here in 2011. The region a key contributor to reaching our overall growth target of 20 percent year on year,” said Cotton On Group South Africa Country Manager Johan van Wyk.

Lured by opening-day bargains for their favourite global brands, shoppers in the new mall showed no sign of concern.

“It seems like this mall is going to be a success even though things aren’t going so well,” said Christa Noi, 25, an office manager in Johannesburg.

Apple Loses Its Luster in China?