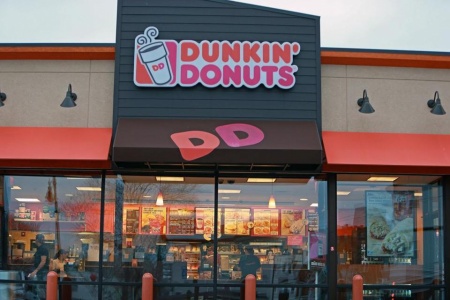 There’s on-demand delivery of groceries in Boston, along with beer, baby products, and dog food. Now you can add doughnuts and coffee to the list.

Chief executive Nigel Travis said the testing in other regions helped the Canton-based company work out kinks before officially offering the service in its home state, a place with 1,152 Dunkin’ Donut shops. That’s second only to New York State (1,429).

“Boston is such an important market,” Travis said Thursday, “we wanted to iron it out.”

Dunkin’ does more than 60 percent of its business before noon, so adding a daily delivery option may help boost early sales as it faces increased competition from chains like Taco Bell and McDonald’s, which are angling to get in on the all-day breakfast market.

Dunkin’ Donuts also released its second-quarter earnings Thursday, showing sales at its US locations open for a year or more rose 2 percent, helped by stronger sales of beverages and breakfast sandwiches, pricing, and favorable weather.

But coffee can get cold fast.

Both DoorDash and Favor, the two on-demand delivery companies that Dunkin’ Donuts has partnered with, said they can deliver a dozen doughnuts, a Box O’ Joe, or anything else on the menu in less than 45 minutes.

Keith Duncan, senior vice president of sales at Favor, said coffee and food can be delivered fast and hot because most Boston-area residents in the company’s coverage area live within a half-mile of a Dunkin’ Donuts shop.

A customer using Favor’s mobile app can get a hot $2 coffee delivered to their door for a $6 delivery fee. The company also adds a 5 percent fee if the service pays for the food on a customer’s behalf, instead of the customer paying directly. Additionally, Favor suggests runners get a tip.

That means a medium regular coffee could cost about $10, or five times the in-store price.

While that might seem steep, Duncan said thousands of people in the Boston area already bought Dunkin’ food and coffee on-demand in recent weeks during a pre-test rollout.

Some people have even placed orders for delivery from a building where a Dunkin’ Donuts is located, Duncan said.

“Call it laziness or convenience, people are doing it for different reasons,” he said. “Maybe they just can’t do it for themselves or they just like the fact that someone will do it for them.”

DoorDash was launched in Boston and Cambridge in fall 2014 as a service that would deliver food from restaurants that did not have their own delivery services. The three-year-old tech company has raised more than $180 million to expand its delivery service, ferrying meals from local restaurants like Figs and Anna’s Taqueria to customers’ front doors.

DoorDash said it charges $5.99 per delivery, with no minimum.

Technically, a customer could have used either delivery service prior to Thursday’s announcement, but Sherrill Kaplan, vice president of digital marketing and innovation for Dunkin’ Donuts, said the new arrangement allows all parties to benefit from promotional opportunities and potentially reach more customers.

She said it also gives Dunkin’ Donuts new data on how its customers react to on-demand services.

“We’ve got a lot of pent-up demand with our fans in Boston,” she said. Now “we can actually say, ‘We deliver’ and we can see how this changes our business; do we get more catering or office business from it?”

One of the largest Malls opened in South Africa