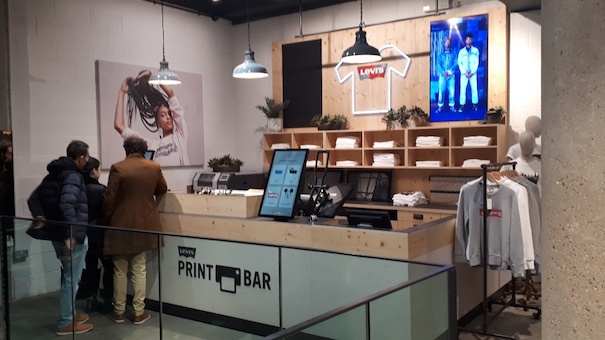 The Levi’s flagship on Regent Street owes much of its interior layout and style to consultancy Checkland Kindleysides, which worked on the two-floor space and gave it its shape when it reopened following a root and branch revamp in 2010. Since that time, various elements of the blueprint have been re-examined and while much of the original remains, a significant rearrangement of the store took place at the end of last year.

Perhaps foremost among the things that have been done is personalisation and for those wishing for the ultimate bespoke pair of 501s, there is the Lot No.1 desk at the back of the basement. Here shoppers can have a pair of jeans made to their own specification, for a price. This part of the shop used to be a glass-fronted stockroom, but it is now a selling area. It is combined with the Levi’s Tailor Shop, as seen in the Times Square flagship in New York, where a more modest denim makeover can be commissioned.

Upstairs, large screens front the ‘Print Bar’ where shoppers can have basic white denim printed to order, from a range of logos and ‘Limited Edition’ options. Perhaps what all of this says is that there is only so much that can be done with a basic commodity and when this has been made fully available, it is time for something else.