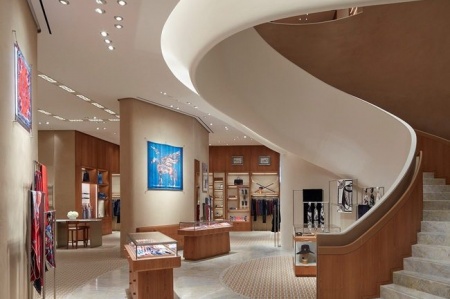 
The store is characterized by an oval winding staircase that is paved in white marble and found in the middle of the store. Meanwhile, the Hermès ex-libris set can be found throughout the store within the familiar Faubourg mosaic, while items are arranged according to the Hermès universes.

“The opening of our new store at 100 Bloor Street West in Toronto reaffirms Hermès’ commitment to Canada, and salutes the refinement and vitality of this special city,” said Jennifer Carter, President and CEO, Hermès Canada.

“The deep and authentic bond between Hermès and Canadians is emotional – built on shared values, inspired by the energy to keep innovating, and a love for hand crafted objects made for living.”

On the ground floor, customers can find the brand’s iconic silk scarves in the the silk universe, as well as a jewellery area, a space dedicated to the brand’s full range of fragrances, and the men’s universe.

On the second floor, shoppers will enter the home universe, which houses Hermès’ furniture and lighting, and home decor. Near the windows are where the women’s and leather universes can be found.

For the opening, Hermès also launched special products developed exclusively for Toronto that reflect the city.