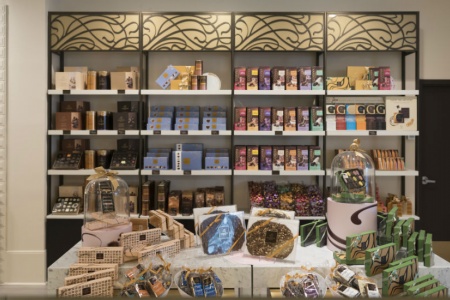 Godiva opens its first in-store café in the United States.

Located in New York City’s iconic Rockefeller Center, the newly-renovated store features a seating area where consumers can enjoy a new collection of French-style desserts or Godiva’s signature chocolate treats. With the new store design, chocolate lovers can also shop their favorite boutique offerings.
Godiva, which was purchased by Yildiz Holdings in 2007, opened its first café on the second floor of Harrod’s in London in 2012. The 40-plus table venue offers chocolate beverages, pastries and chocolates. The company also has a store in Harrod’s Food Hall.
The branded café concept has proved to be a popular way to connect with consumers, particularly in Chicago. In May, Ferrero opened a Nutella café on Michigan Avenue. In 2015, New York-based Dylan’s Candy Bar opened a café and retail store in the Tribune Tower, a couple blocks north of Fannie May’s flagship location, which was remodeled last year to include seating and cafe-style offerings. Ghirardelli also launched an ice cream shop and retail store in the Wrigley Building, across the street from the Tribune Tower.
Italian group Loacker has launched seven Loacker Stores in Italy, a hybrid of a coffee shop, pastry shop and retail outlet, offering consumers coffee, pastries, a limited café menu and an opportunity to peruse the entire Loacker product line.

China’s Store of the Future Has No Checkout, No Cash and No Staff