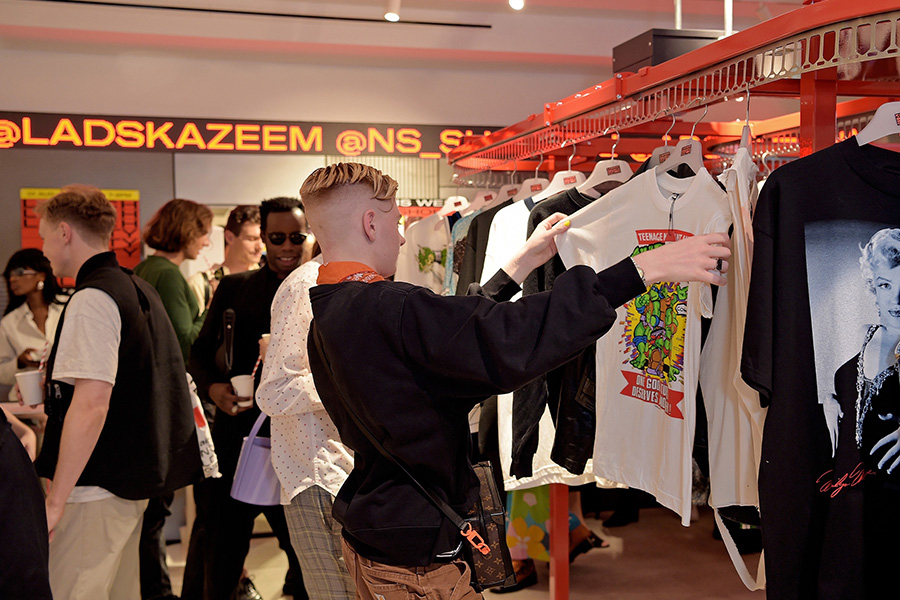 I was born in 1995. If you ask some, I am a member of Generation Z. Others will say that I am more of a millennial. No wonder I’ve always felt like I straddled the line between the two. While technically I’m a member of Gen Z, before the time when “generational experts” and marketing firms started targeting my cohort, I played the part of a millennial, doing all the things that those same marketers labeled as being peak millennial behavior. This means: I got my fashion tips from Tumblr, started a style blog on Blogspot, and dressed like every other person my age in middle school (first, at Abercrombie; then, Urban Outfitters and Free People). It wasn’t until college that I even thought to try thrift shopping. Once I had, it was years before I learned the ins and outs of the trade — which days my local Goodwill locations got new stock, what’s salvageable and what’s not, and how much is too much to spend on a pair of vintage Levi’s. Thrifting now feels like one of the most Gen Z things I do, and it’s no wonder: For Gen Z, thrifting isn’t just a way to shop — it’s a lifestyle.
Olivia McCafferty-Cable,17, from Santa Barbara, California, has been thrifting regularly since she was 13. “Thrifting allowed me to find things at very affordable prices that no one else I knew had,” she tells Refinery29. “I like standing out with my clothes, especially at school, because I tend to be a very quiet person, and [thrifting] was a way for me to express myself and push myself outside of my comfort zone.”
Hannah Valentine, a 19-year-old from St. Louis, Missouri, doesn’t even remember her first thrifting experience. “Thrifting has been a constant in my life for years,” she says. “I’ll never stop loving the rush of adrenaline that I get when I enter a thrift store not knowing what I’m going to find that day.” While Valentine fell for thrift shopping because of the search aspect, over time, it turned into something else entirely. “Now, I thrift because I want to help save clothing from being thrown away, while also providing an easy and accessible way for people to shop secondhand so that they’re not instead shopping on fast fashion websites,” Valentine says. The way she does the latter is through Depop, an online marketplace where many members of Gen Z have set up shop. (According to The Wall Street Journal, of Depop’s 15 million users in 2019, 90% were under the age of 26.) Valentine’s Depop page is scattered with floral maxi dresses, ‘90s sportswear à la Princess Diana, and retro pins from Steak & Shake. She offers sizes up to 3X and uses her platform on the app to advocate for people with disabilities. “I think of my job as a second-hand clothing rehoming service,” she says.

Another seller on Depop, 23-year-old Monique Miu Masuko, started her thrifting journey in middle school. Ever since her mom told her when she was a kid that buying secondhand was the easiest and most affordable way to stay on-trend, Masuko hasn’t stopped thrifting. Like so many others before her, took her favorite pastime and built a career out of it. Now her Depop shop has 2.8k followers. “[Thrifting] is more affordable, accessible, and eco-friendly — all three of which go hand in hand with sustaining Gen Z’s future,” she says.
According to Deloitte, Gen Z’s interest in thrifting could have something to do with having entered adolescence during the recession of 2007 to 2009, when the oldest members of Gen Z were between 12 and 14 years old. Many grew up experiencing financial hardship, and so it makes perfect sense that they’d be searching out economically friendly ways of staying in fashion.
Gen Z isn’t the only demographic actively shopping secondhand right now. Fashion search engine Lyst reported that, in September, there was a 104% increase in online fashion searches for secondhand-related keywords like “vintage fashion” and “slow fashion,” the latter of which was responsible for more than seven million social impressions. But they are the largest demographic: An estimated 46% of Gen Z shopped secondhand in 2019, according to Medium, compared to 37% of millennials and just 18% of Gen X. Since Gen Z has matured into its spending power, the resale market has grown significantly. In fact, it’s grown 21 times faster than traditional retail over the past three years to be worth $24 billion in 2019. It makes sense. Unlike millennials, who are said to “seek validation through purchases,” members of Gen Z are obsessed with being different from their peers. Ask the question of “why thrift?” for instance, and it will result in a wide variety of answers. (I’d know, I talked to over 30 of them.)

Some listed being able to look unique and build a more personalized sense of style as one of the reasons for thrifting. Tori López, 24, from Brooklyn, New York, says she found an “inexplicable sense of empowerment and independence” in wearing pieces that felt made for her, even if they were previously owned by someone else. “Wearing ‘one-of-a-kind’ clothing makes me feel special; it makes me feel unique; it makes me feel happy — and if that outfit costs you $30, all the better.”
Elena Dunn-Barcelona, a 24-year-old from Harlem, fell in love with thrifting during her senior year of high school because it allowed her to compete with her classmates style-wise “for an eighth of the price,” she says. “I was one of a handful of Black kids at a predominantly white boarding school,” she tells Refinery29. According to Dunn-Barcelona, everyone there wore the same things from the same brands (“Sperrys, J.Crew, Free People, Vineyard Vines, etc.”), none of which her parents were willing to buy for her: “There was no way they were going to hand me $60-plus for a top that would be out of style before the school year was over.” Thrifting made it possible for Dunn-Barcelona to build confidence in her style without overspending. It also allowed her to find options that fit when off-the-rack styles wouldn’t because of her scoliosis. “I have a shortened torso, and stand at only 4 feet and 4 inches, which makes shopping for clothing a constant struggle for me. But after a while, when I’d find cute things that didn’t fit me, I realized that someone else might love them, so I turned it into a business,” she says. Her Depop shop, Mighty Thrift, sells clothing in sizes 0 to 5X and has over 5k followers. By August 2021, she says thrifting will be her sole way of supporting herself.
There is also the matter of the climate crisis looming, which many listed as a major motivation for thrifting. “Thrifting taught me that I can positively impact this world in more ways than one,” Lopez says. “It’s granted me an entryway into a new way of living that feels more productive and purposeful.” She explains that what started as a mode of expression has since catalyzed a more intentional lifestyle, where, across categories, she’s more considerate about her purchases: “Now that I’m older, I find myself frequenting more local businesses, paying attention to companies’ stances on current political issues, and buying quality over quantity.”

During the lockdown, many young people took to TikTok for entertainment. In the process they also learned about the damaging effects that fashion — and other powerful industries — has on the environment. Of TikTok’s 800 million worldwide users, 60% are members of Gen Z, many of whom are using their fast-growing platforms to promote thrifting as an alternative to fast fashion and an easy way to minimize waste. The numbers don’t lie: #ThriftStore has 92.7 million views on the app, while #Secondhand has 90.8 million views. “So much of our clothes get worn a couple of times, then head to the landfill, which is really gross considering how many resources go into producing clothes,” says 24-year-old Lily Fulop, the author of Wear, Repair, Repurpose: A Maker’s Guide to Mending and Upcycling Clothes and a designer at Refinery29. “We need to produce less clothing, and make use of the clothes that are already in existence,” she says. One of the easiest and most affordable ways to do that is by thrifting: “It saves water, reduces microplastics and petroleum use, cuts down on pollution from pesticides, dye, and shipping… the list goes on.”
According to Emily Reyes, a 21-year-old living in New York City, Gen Z YouTube influencers like Emma Chamberlain are in large part responsible for showing young people that, unlike what their older family members or friends would have them believe, fast fashion isn’t the only way to find on-trend clothing at an affordable price. The 19-year-old YouTube celebrity — who has 9.6 million subscribers on YouTube and 8.3 million followers on TikTok — is known for frequenting Goodwill. Chamberlain’s thrift hauls, videos in which she goes through the items she recently thrifted and styles them on herself, are among her most popular videos on both platforms. Thrifting feels emblematic of the way that Gen Z prefers to stray from the beaten path — a path beaten to death by millennials, Gen X, and Baby Boomers, that doesn’t even seem to be going anywhere anymore. They want to be independent. They want to save the planet. They also want to save money — andmake money. And they want to do it all in a cute outfit, probably one that costs less than $10. Thrifting makes all of that possible. Now that I know this, I look forward to making up for lost time.
It’s a cliché, but this year was supposed to be our year — full of independence, opportunity, or at least a few weekend afternoons spent with more than 10 friends with fewer than six feet between us. But with COVID-necessary social distancing, a shitty job market, and closed campuses, 2020 hasn’t given us much to work with. Past generations have had to deal with a recession, social upheaval, and changing norms: We’ve had to deal with all of it at once.
So, what now? What do we do with our careers, our relationships, and our lives? How do we move forward when we’re still stuck in our high school bedrooms? These stories are for us — filled with the resources, blueprints, and people who are finding ways to turn all this garbage into something like lemonade.
By Eliza Huber
Source: Refinery 29

Alibaba in Talks to Invest in Online Fashion Retailer Farfetch