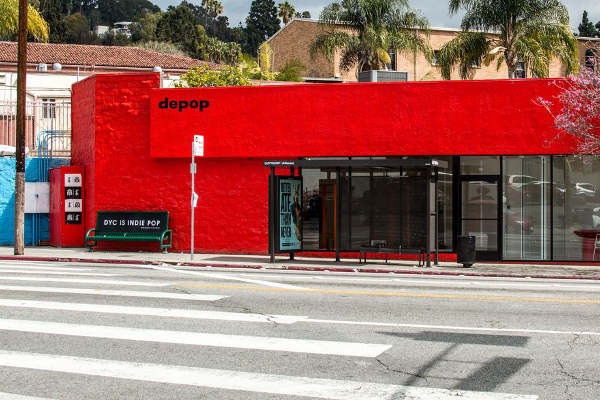 London-based resale app Depop has opened its first brick and mortar store in LA’s Silver Lake neighborhood. This is the first store globally for the app which plans to open a second US location in NYC later this spring.

The Silver Lake store is a 1,000-square-foot space that will invite customers to experience the product and also function as a creative gathering space. The store will serve as a shop, a studio-for-hire and a pop-up space.Co-founder Simon Beckerman said in a release, “It’s a place where we could give back to our creative community that reflects the vibe of the area.”Beckerman said he feels brick-and-mortar stores are important for the apparel resale space and Depop’s entry into physical retail follows in the footsteps of similar resale brands The RealReal and ThredUp which began online.”For vintage, unique pieces, and brands that are not easily found online, these are all things you want to touch, see, and experiment with,” Beckerman explained, noting that the store will have a rotating inventory to maximize consumer exposure to top products.Depop is a well-funded fashion start up, having raised $42.5 million since its inception. Indeed, it would seem to be a smart investment with the secondhand market poised for exponential growth over the next few years. Consumers reportedly spent $18 billion on used clothes in 2016 and the industry is expected to grow to $33 billion in the next three years.Depop reports 9 million users. The app hit $230 million in 2017 and has seen a 130 percent increase in revenue in the US. 60,000 new items are posted per day on the app.Fashion consumers and celebrities alike post items through the app, ranging from secondhand apparel and footwear to celebrity gifted items that were worn once for an event. Celebrity users of the app include Emily Ratajkowski and Dita Von Teese.Depop’s LA store is now open. A pop-up called Best of LA will be in the space from March 24 through April 15 and will showcase a curated assortment from Depop’s vendors.Beckerman revealed that after opening a second location in New York this spring, the company is planning to open stores in London and then in Milan by 2019.The first Depop store is located at 3531 W. Sunset Blvd., Los Angeles.