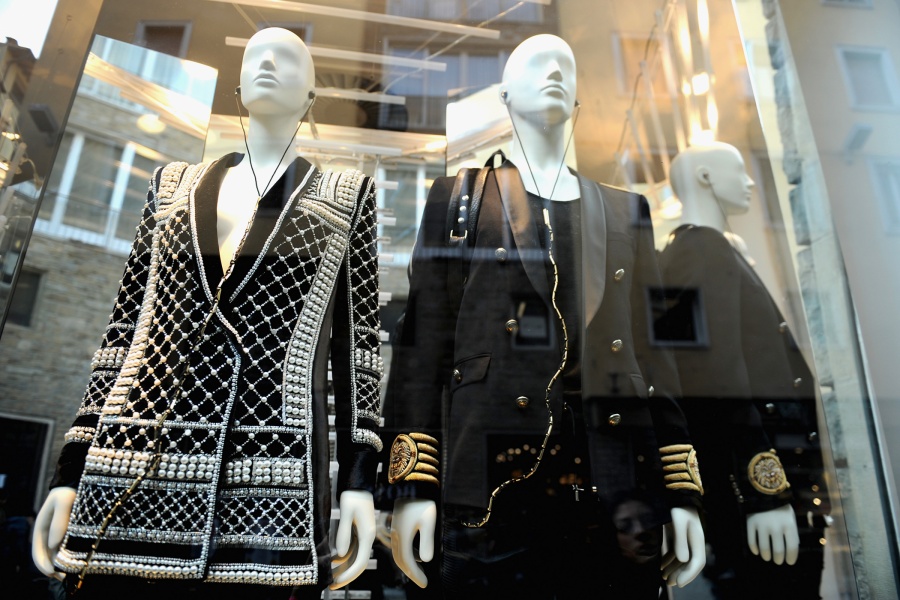 Balmain has premièred in Milan, picking the perfect time to open its first Italian store. The French label chose a highly strategic week, coinciding with the start of Milan’s Furniture Show, to unveil the first store designed by Creative Director Olivier Rousteing, in collaboration with the three young architects of Parisian studio AMV, Anna Philippou, Marie-Charlotte Prosperi-Fouchard and Victoire Guerlay.
Visitors flocked to the Italian city’s latest luxury address on Monday, at no. 27 on uber-chic via Montenapoleone, where Balmain regaled scores of customers with an innovative immersive experience, which literally plunged them into Olivier Rousteing’s head via an augmented reality headset.

Comfortably ensconced on a sofa in the virtual lounge hosting the ‘My City of Lights’ experience, available until 29th April, visitors simply had to don the headset at the store’s entrance to be taken on a whirlwind tour up and down endless staircases, inside the palace dreamed up by Rousteing to showcase his sources of inspirations. Vertigo is guaranteed, as you glide around a sombre Gothic castle’s enormous chandeliers or over the glittering panorama of Paris at night, the city stretching as far as the virtual eye can see.

After Milan, ‘My City of Lights’ will travel to other Balmain stores around the world. “This initiative is the first stage in a communication project which will focus on the concept of entertainment. We want to amuse and surprise our customers,” said Massimo Piombini to FashionNetwork.com. Exactly a year ago, Piombini took charge of the French label, which was bought in 2016 by Qatari investment fund Mayhoola.

“When I arrived, the revenue reported for 2016 was €136 million. In 2017, the label grew 15%, and we carried out major investments. For 2018, we are forecasting a sales growth ranging between 30% and 40%,” he said. Balmain has overhauled the way it operates, bolstered its logistics capabilities, opened subsidiaries in the USA and Europe, set up a merchandising division and hired a number of managers, all of this in the course of a year which was “very intense, as the next few years will also be, because the market will not sit and wait for us!” said Piombini.

Balmain generates 90% of its revenue via the wholesale channel, but it is planning to turbo-boost its retail capabilities: it currently operates 16 monobrand stores worldwide, and wants to open another thirty or so in the next four to five years. After Milan, the next openings will be Miami, Hong Kong, Las Vegas, Beijing, and a second store in Paris by early 2019, in rue Saint-Honoré, slotting in between the Costes Hotel and the Mandarin Oriental.

It will all depend on the opportunities that will arise. In Milan, the via Montenapoleone premises, previously occupied by a footwear retailer, became available in four months. “[The store] is too small to showcase our menswear range too, but we could not let such an opportunity pass us by,” said Piombini. The store extends on 280 m2 on two floors, and it features an eclectic interiors style, ranging from the luxury bourgeois atmosphere of a Parisian flat, inspired by the Balmain store in rue François 1er, Paris, to a more contemporary, international ambience.

The store is like a showcase apartment in a private building, each room presenting a different facet of the Balmain world. The library-style entrance is dedicated to handbags, an entertainment room complete with safe showcases jewellery on a central table, and the hall features a huge black velvet pouffe on which customers can choose their shoes at leisure.

A wrought-iron staircase leads up to the first floor, where the drawing room becomes fitting room, while the lounge, in lavish Versailles hall-of-mirrors style, is reserved to the women’s ready-to-wear collections. Hidden among the mirrors, a concealed door leads to a secret fitting room.

The interiors are lavishly furnished with materials like marble, parquet floors, revamped vintage furniture and plush rugs, and will be the blueprint for future Balmain stores.