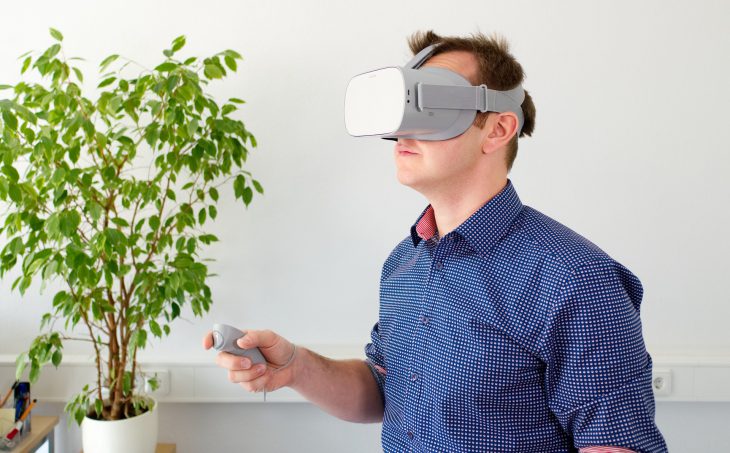 Called Axis, it is intended specifically for retailers and was launched on Monday by Santa Monica AR/VR ad agency and tech shop Vertebrae.

How it helps drive visitors to online stores. It takes advantage of the fact that Web-based AR, with no additional apps or plugins, is now possible across all kinds of devices. Recent iOS phones and tablets can utilize front- and rear-facing cameras to the most advantage, founder and CEO Vince Cacace said, but Android phones, Macs and PCs can also enable a variety of AR capabilities via the platform.

A key feature of the Axis platform is the ability to virtually try on a personal product, such as shoes, handbags or sunglasses.

To do so, a retailer’s site requests access to a visitor’s device camera. Once granted, Axis captures a live shot of the user and employs either Apple’s AR Quick Look technology or Vertebrae’s own proprietary software to conduct facial recognition or the recognition of edges in shapes.

Cacace noted that, in addition to accessories like hats or handbags, the visualization-in-real-environments works well on certain kinds of products that benefit from close inspection, like cameras, or on furniture that can be placed into “actual” living spaces. What doesn’t work well: clothing like jackets, since they drape differently on different kinds of bodies.

New kinds of intent analytics. The platform also offers the capability of producing at scale lightweight 3D models of product catalogs, for which Vertebrae employs a partner network of production/developer shops. 3D models of products, Cacace noted, offer more detail and more flexible viewing than, say, a flat 2D photo or even a 360-degree image, as well as the ability to virtually open a product.

Analytics offer the usual menu of engagement, products selected, and so on, but it is augmented with intent-indicating data about AR-specific user behavior, such as whether the visitor went “behind” the product or opened it up.

Tenth Street Hats, based in Stockton, California, is currently employing the Axis platform, and Cacace said his company is working with Crate & Barrel to utilize the platform for “a good number of products.”

He said that Axis is the only commerce-focused, web-based platform for AR retail experiences and 3D asset creation that works across devices and front- as well as rear-facing cameras. He noted that e-commerce platform Shopify has also rolled out a web-based AR platform, but it only offers Apple’s Quick Look technology and is only for rear-facing cameras.

Why this matters to marketers. Vertebrae cites a November 2017 Forrester report that found only five percent of marketers are employing AR. But a commerce-focused web platform could make this more appealing to marketers looking for a way to simulate the store experience online.

The key question: Is this more than just a gimmick?

Walmart ramps up self-checkout, scales down 'scan and go' shopping

Levi Strauss plans IPO that values company at up to $5 billion, sources say