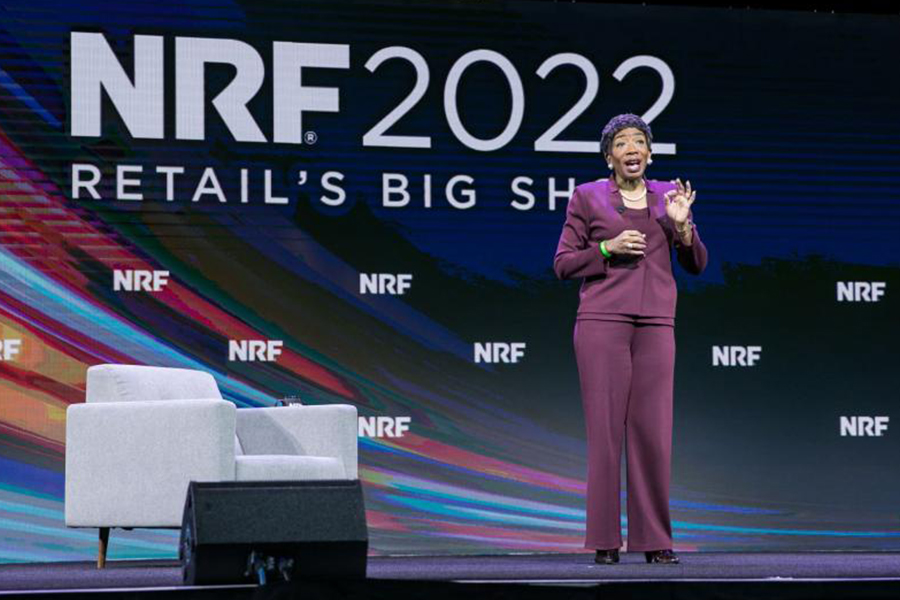 Nothing could stop NRF 2022: Retail’s Big Show – not icy winter temperatures and inclement weather, not even the latest iteration of a lingering pandemic. According to National Retail Federation President and CEO Matt Shay, despite these challenges, the event, which ran Jan. 16-18 at New York’s Javits Center, managed to draw about 20,000 attendees and 800 exhibiting companies, along with a range of speakers.

Even a cursory trip around the show floor was enough to reveal a breathtaking range of solutions to help retailers, from sourcing of products to the in-store customer experience, and all points in between. Following are five particularly noteworthy trends observed at NRF 2022: Retail’s Big Show:

• Automation Rules: This one was pretty obvious, from the sheer number of such solutions in evidence at the show, including Locus Robotics’ “co-bots,” designed to work alongside humans in fulfillment warehouses, zipping around the company’s display area; AutoStore’s grid-based picking system, also being demoed; Avidbots’ state-of-the-art robotic floor cleaner; and Ottonomy, whose proprietary technology enables fully autonomous curbside and last-mile delivery, reducing retail’s carbon footprint, to name just a few.

According to BJ Santiago, CEO of Nicholasville, Ky.-based Badger Technologies, a maker of inventory control and hazard mitigation robots that traverse store aisles at such grocers as Woodman’s and Ahold Delhaize USA banners Giant/Martin’s and Stop & Shop, automated in-store tech is becoming much more the norm, with units offering additional capabilities, such as robotic arms for stocking shelves, probably rolling out in the next five to 10 years.

Sam Saad, VP of strategy and growth at Mountain View, Calif.-based Gatik, a provider of “middle-mile” solutions through its fleet of autonomous trucks that are currently moving items for Walmart and largest Canadian retailer Loblaws, noted that the company was “scaling up rapidly” in anticipation of “explosive growth” in terms of new partnerships, expansions of existing partnerships and infusion of new capital. As to when fully automated vehicles shuttling products from warehouses to stores and from store to store on public roads becomes the industry standard, Saad predicted “big shifts in the next five years.”

• Crypto is Coming: With all of the buzz surrounding cryptocurrency, particularly Bitcoin, of late, it’s only natural that retailers would increasingly be looking into crypto as a payment option for consumers, and tech companies are meeting that need. Atlanta-based NCR, for example, recently acquired cryptocurrency software provider LibertyX, which enables customers the ability to buy and sell cryptocurrency, conduct cross-border remittance, and accept digital currency payments across digital and physical channels. NCR will use its Pay360 platform to offer the LibertyX capabilities as part of its solutions for banks, retailers and restaurants.

Unsurprisingly, Peter Jensen, CEO of San Francisco-based RocketFuel Blockchain, a global payment-processing company offering one-click checkout solutions using Bitcoin and other cryptocurrencies, is particularly bullish on crypto, explaining that retailers that accept cryptocurrencies as a payment option in-store or online will increase revenue by gaining access to a new wealthy group of customers, many of them younger, and reduce cost, since, unlike credit cards, crypto never gets declined and there are no chargebacks.

Additionally, in common with David Wilkinson, president of NCR Retail, Jensen views crypto as particularly beneficial for the unbanked and underbanked populations of the world, as it enables them to take part in the digital economy, in which “your phone becomes your bank,” as Jensen put it.

Jensen noted that in stores, grocers could integrate the cryptocurrency payment option into their point-of-sales system, allowing shoppers to pay by phone, as they already do with such options as Apple Pay. Although he acknowledged that on the whole, the United States is lagging behind in the adoption of crypto, despite Miami’s reputation as something of a hub in this regard, he believes that the main driver for change will be when the U.S. Central Bank comes out with a plan for cryptocurrency, a move that he thinks could happen as soon as this year. 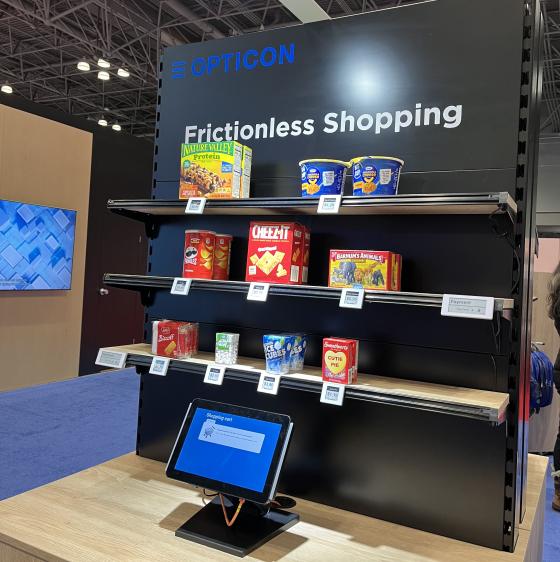 There were a large range of frictionless shopping solutions on display at NRF 2022: Retail’s Big Show, including from Opticon.

• Frictionless is Here to Stay: Although Amazon’s much-touted Just Walk Out technology predated the pandemic, there’s no doubt that consumers’ enthusiasm for quick, convenient, contactless shopping experiences skyrocketed during the age of COVID-19. Of course, once consumers discover an easier way of doing anything, that becomes the expectation, and retail tech must rise to the occasion. Other retailers to explore such technology include Ahold Delhaize USA, Giant Eagle, and Hy-Vee at its fuel stations and convenience stores.

There were plenty of examples of this at the show, including self-checkout options from NCR; Accuvia Software Group, in partnership with Toshiba; and Mashgin, which offers a completely touchless system, as well as solutions from such companies as barcode-scanning technology provider Opticon; retail store fixture manufacturer Lozier Corp., in conjunction with Cornerstone Automation Systems LLC; and Edgify, developer of a distributed artificial intelligence training framework solution. From the looks of things, ensuring a frictionless shopping experience for customers that will enable them to get in and out of a store as quickly as possible – and often without any human intervention – will only become more of an imperative for retailers going forward.

• Evolution of E-Commerce: Speaking of contactless shopping experiences, e-commerce options such as home delivery orders left at front doors and curbside pickup gave consumers rattled by COVID-19 a sense of comfort that they wouldn’t have to encounter possibly infected store associates or delivery people in person. As a result, online ordering surged during the pandemic and is poised to remain a major shopping method, due to its anytime convenience – a feature especially exploited by so-called instant-needs platforms such as Gopuff and Gorillas, which are continually aiming to narrow the delivery window.

Part of this evolution of e-commerce is Santa Monica, Calif.-based Robomart, an e-commerce service that enables consumers to shop for necessities by “hailing” a mobile store via app; when the vehicle pulls up at the curb in front of their house, the consumer opens the vehicle door using the app and then selects their desired items. The company’s fleets of snack and pharmacy vehicles are currently deployed, with grocery, café (deli) and ice cream versions up next, and a fast-food offering due by the end of the year. CEO and co-founder Ali Ahmed noted how the service was seeing great repeat business in West Hollywood, Calif., where it’s currently available, with consumers hailing the vehicles 2.3 times a week, and average engagement, from hailing the vehicle to the completion of the order, lasting a mere nine minutes.

The company has recently been issued a patent for its one-tap store-hailing and seamless checkout-free technology, which should make the service even easier to use as it transitions to a marketplace model. Robomart’s Retailer Platform, introduced last September, provides a turnkey solution for retailers, enabling them to deploy branded mobile stores. The service is also set to expand: Ahmed said that the vehicles would soon be making their way across Los Angeles, and there are plans to launch on the East Coast as well.

Other providers that offer branded marketplace e-commerce solutions include Rosie, Wynshop and NCR’s Freshop, as food retailers, particularly smaller independents, seek to create their own identities in the realm of digital grocery. 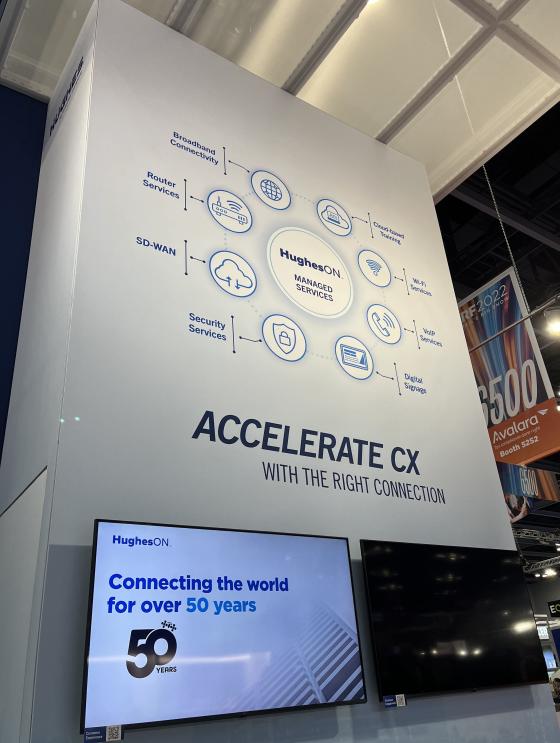 Among Hughes Network Systems’ offerings are cybersecurity services for retailers.

• Safe and Secure: There are many ways to interpret these terms, but if the pandemic has taught us anything, it’s that people want to know that the places that they shop are looking out for their well-being. One example of this is to ensure that sanitary and hygienic standards are enforced across all stores in a chain, which Qvalon, a New York-based cloud-based solution for multiple-location retailers, can help with. The company assists retailers in creating customized criteria, including cleanliness, and then provides visibility into how each store is performing, so that retailers can see what needs to be improved and where, resulting in a more consistent – and safer – experience across locations.

Meanwhile, a major security issue for grocers is loss prevention, which an innovative company like Mountain View, Calif.-based spatial intelligence platform Pathr.ai is able to do with its solution that tracks the movements of people in a retail location to gauge behavior patterns – anomalous behavior can be flagged and reported to the retailer for further investigation.

Germantown, Md.-based Hughes Network Systems, a managed services provider whose offerings include security services, among them protecting retailers from cyberattacks, is ramping up its offerings in the SOC (security operations center)-as-a-service area, which Jeff Bradbury, senior marketing director, North America, likened to “having a cybersecurity SWAT team on standby.”

One fascinating byproduct of in-store robots such as those deployed by Badger Technologies is the apparent chilling effect that they have on retail theft. Santiago related an anecdote that one retailer that deployed the robots in its HBC aisle at a peak time for theft observed a 14% decline in such incidents, since would-be perpetrators believed that the robots were monitoring their behavior, although the units are designed for inventory control and hazard mitigation only.

In terms of additional trends to look out for, Bradbury noted that in the area of networking services, Hughes is working with satellite communications service OneWeb on a low-earth-orbit connectivity solution akin to SpaceX’s Starlink venture but tailored to b-to-b enterprise businesses. According to Bradbury, the solution will be available later this year, although there are already some early adopters in the market.

He went on to note that grocers stepped up to the plate and helped people during the pandemic by taking on new tech offerings, so it was up to vendor partners like Hughes to help move food retailers from being reactive to proactive in this realm, thereby “creating a new baseline” for the industry.

As for retailers’ ability to meet this present moment and beyond through their adoption of pertinent technology, NRF’s Shay has no doubt that they can and will: “There are a lot of initiatives underway, and we’re confident that retail is going to continue to step up and meet the biggest challenges of today.”

Walmart to Create Its Own Cryptocurrency