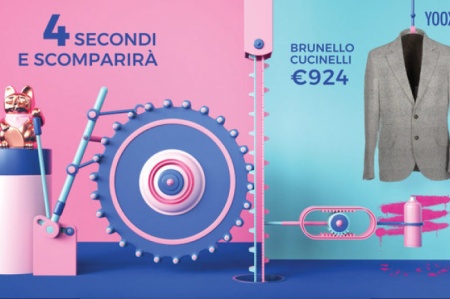 The days of invasive banners or repetitive video ads that cling on to web pages for minutes on end are over. Online advertisers are coming up with a spate of ingenious tricks to capture the attention of web users and get an immediate reaction from them, like the new feature launched by Yoox on YouTube. The Italian fashion and luxury e-tailer has joined forces with Google and created a ground-breaking advertising format, a series of video ads designed to stimulate impulse purchases, which self-destruct in 15 seconds.

Each of the 3D animation clips, playful, wacky and colourful like kids’ cartoons, presents a hard-to-find, highly coveted luxury item, threatening it with a horrible fate … unless it is purchased – and saved – before the end of the clip.

Cue for example a robot which activates a sinister Meccano-style contraption, with a bucket which threatens to pour a shovelful of molten lava on a pair of Dolce & Gabbana high heels. Or a flimsy ballet dancer pirouetting on a music box, while an electric saw inches dangerously closer to a pair of Sergio Rossi shoes.

Or a paint bomb, remotely activated by a cat, threatening to smother a Brunello Cucinelli jacket under a tagger’s fluorescent pink spray paint. Or a Tory Burch handbag, stranded on a conveyor belt in the middle of a row of yellow rubber ducks, whose fate is to be flattened by a clothes iron.

The idea is to “play with the attractiveness of luxury goods and the inclination to shop in a more fun way,” wrote Yoox in a press release. The main novelty is that “once the product disappears from view, the web user loses the opportunity both of finding the product in question on the Yoox site and to view the same clip on YouTube. In other words, it is now or never!”

There is in fact no way of hitting rewind, or finding the same product on Yoox, as each advert is addressed to one and the same user only. The products featured on the videos are part of the ‘World’s Most Exclusive Collection’, concocted by Yoox for this campaign, whose technology was developed in partnership with Stink Studios. The campaign itself will run for a limited length of time, and will be broadcast until mid-December in Italy, the USA, Japan and South Korea only.

The videos are the perfect gimmick to unleash the purchasing stimulus hidden deep inside all of us. Especially as the year-end festivities draw near. It remains to be seen whether YouTube, whose audience consists mostly of very young people, will allow Yoox to reach the luxury consumer target it seeks.