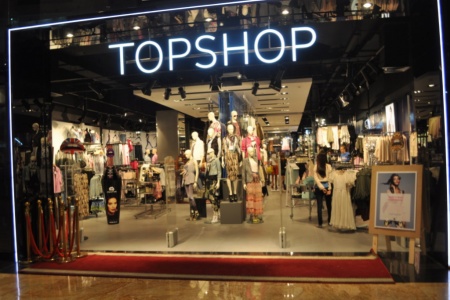 There was a time, for many British teenagers, when no Saturday was complete without a trip to Topshop. It was a name that had cache – and fashion editors didn’t think twice about dressing in Topshop threads.

But now young consumers are more likely to pick their party outfits and festival fashion on their phones than traipse to bricks and mortar stores. And Topshop, once a stalwart of the British high street, is falling behind the rash of other UK retailers offering up fast(er) fashion, on the cheap, online.

While Manchester-based Boohoo, PrettyLittleThing and Missguided, as well
as Asos, have adventurous online offerings, Topshop is beginning to
feel staid.

Styling seems to be second nature to these younger brands – shoots of models wearing metallic bralets and sequinned miniskirts mirror what young consumers see on the Instagrams of influencers and reality TV stars. Next to this, Topshop’s online presence falls flat – clunky and unglamorous.

Fashions rise and fall on Instagram feeds. To keep them interested, retailers need to match that pace. Online retailers don’t have physical stores holding them back, and are better able to better match the dynamism of social media trends.

While Topshop’s Oxford Circus flagship store is still a “destination” shop, branches outside the capital can feel like relics of an age before digital shopping carts, without the pull of a brow, nail or blowdry bar.

Young, often cash-strapped shoppers also want cheap clothes. Topshop’s current festival fashion includes an £85 maxi sequin cape, a £90 cropped feather gilet and a £50 limited edition feather collar . And these are not clothes to be worn again and again. Compare that to Boohoo, whose Festival Shop has very few items over £30, and most under £20.

For those seeking something a bit more high-end, but still high street – the people who grew up buying Topshop as teens, but have since become buyers of office wear and maternity wear – other brands have stepped up. There’s Zara for the more fashion-forward crowd, Cos and newcomers such as Finery.

Topshop’s top-end offerings – such as its Unique line that is sold on Net-a-Porter – are less enticing than the cheaper offshoots of luxury brands for those with £200 to spend on a single item.

Topshop – once shorthand for teenage style and its ability to capture the zeitgeist with festival-friendly florals – is not catering to Generation Z, and it’s not winning over the Generation Y pound either.

The $8 billion retail man who's eyeing up the UK