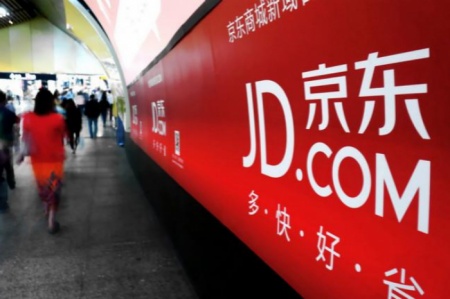 Fresh lobsters. The latest Mercedes Benz. Johnny Walker whisky. Lafite wines. Liverpool FC shirts. Kent and Curwen jackets and McVitie’s biscuits. Or perhaps a $100m house in the centre of Bejing takes your fancy, should you have a spare dime or two?

You name the product and China’s biggest online retailer, JD.com sells it, so long as it’s of the highest quality of course. Now China’s hungry shoppers want more British brands and Richard Liu, JD’s founder and chief executive, is in the UK to hunt them down.

Liu is over in London from Bejing on his own shopping trip. He’s here to
persuade some of the UK’s top names to sell their goods on his site
which has more than a 100,000 products being bought regularly by 226
million Chinese consumers.

What’s not to like? Liu is promising UK companies a market of up to 600
million people, help with the logistics of getting products from the
UK to even the tiniest villages across most of the vast country with the
shortest delivery times.

We meet in one of the grand private rooms at London’s Ritz hotel. In
China, the internet billionaire, whose given name is Liu Qiangdong, is
something of a celebrity for his extraordinary success but also for
causing a stir – before he settled down to marriage two years ago – with
stories about his romances leaking on social media. In the US, Liu is
also well-known from taking JD public in the biggest Nasdaq float in
2014, and becoming the first Chinese internet company to make the
Fortune Global 500 list.

Yet here in the UK Liu has the lowest of profiles. This is his first
UK interview and big pitch to UK companies. There is a translator on
standby although she is underworked because Liu’s English is excellent.
He wears his wealth – he’s worth a cool $8bn or so – lightly. He looks
younger than his 43 years, is courteous and polite but his ambition is
clear to see.

Take his approach to the UK. As well as providing UK companies with
access to sell directly to China without the hassle of setting up a
Chinese entity – he wants to make business easier still by helping with
shipping, payments, customs and delivery services.

Naturally, he is far too diplomatic to say which brands he would most like to see on JD.com’s
cross-border platform, JD Worldwide – although you don’t need to be a
genius to work out that some of the UK’s tip-top brands from the smart
shopping streets close-by are on his wish list.

Liu has also been shopping in Cambridge, for brains rather than
brands. He’s been visiting scientists at the university as well as a
couple of hi-tech companies which he hopes to collaborate with and
invest in, as JD is creating one of the world’s most sophisticated
logistics and delivery operations.

A new London office will open over the next few months, he says, his
second European venture after Paris where JD does big business with
brands from L’Oreal to Remy Martin. He also hopes to expand JD’s own
silk route, which already stretches from Beijing to Hong Kong and New
York to Silicon Valley, Italy, Germany, Korea and Japan, as he grows the
international business.

As well as luxury goods, Liu says Chinese consumers have a taste for
solid everyday goods, like those provided by the Asda supermarket group.
Asda, part of the US retail giant Walmart, is about to launch a
flagship store on JD Worldwide selling everything from health products
to teabags, all of which are sourced in the UK. In return for selling JD
its own nascent Chinese online business, Walmart has become a
shareholder and recently increased its stake in the Nasdaq-listed giant
to 12 per cent.

Walmart joined Tencent, China’s monster internet company and one of
the world’s top 10 most valuable companies, which also has a 15 per cent
stake in JD, giving it access to Mobile QQ and WeChat, China’s biggest
social media platform with 900 million users. Useful shareholders to
have.

JD is now worth a staggering $57.6bn but despite the company’s rapid
growth it’s only recently started to make a profit. Revenues last year
were $37.5bn but it lost $1.4bn. However, first quarter figures for this
year showed the e-commerce site made profits on revenues up by 40 per
cent, and forecasts are good for the full year.

What’s more, he hopes to grow twice as fast as his main rival, Alibaba’s Tmall platform.
Rather than take a fat salary as so many of his peers, Liu opted two
years ago to be paid £1 a year for the next 10 years in return for
options at a strike price of $33.40 for 0.9 per cent of the stock. The
shares are now at $40. Not a bad bet.

Liu’s other big bet is staking his future on the latest technologies.
He shows me a picture on his phone of one of the baby robots his
scientists have made to be used around JD’s warehouses. There are 256 of
them across the country, ranging from mega-spaces to cold-chain
facilities for the fresh crabs and lobsters which are sold alive
online.

Between China and Silicon Valley, Liu now has 9,000 engineers working
on research and development including drones for delivering goods – he
has Amazon in his sights – artificial intelligence, virtual and
augmented reality, logistics automation, unmanned vehicle technologies
and more.

R&D, he says, is used for everything from intelligent pricing to
inventory management and fraud detection to delivery, particularly to
the most remote villages of China.

JD’s logistics are complex but essential to his dream of providing a
top-to-toe online service for customers and controlling the supply
chain. JD’s 65,000 red uniformed delivery employees have become a
ubiquitous sight in China, zipping around on red three-wheel vans from
its 6,906 delivery stations to keep to the promise of next-day
deliveries.

Liu reckons that by the end of next year his first fully-automated
warehouse will be functional but does not predict that robots will take
over all the jobs, at least not soon. “Blue-collar jobs will be lost,
maybe half. But even with robots you still need people working in other
areas, to monitor the video fees, for maintenance of the system and
repairing robots.”

As with so many great entrepreneurs, Liu struck upon success almost by
chance. He was studying for a degree in sociology at Beijing’s
distinguished Renmin University of China and found himself with free
time, so started learning to code and programme. In his second year he
was writing code for electronics firms and then opened a stall called
Jingdong Duo Meiti in 1998 at a Beijing electronics market, from which
he sold magneto-optical equipment and CD burners.

By 2003, he had opened 12 stores but then the SARS outbreak struck, a
disaster that forced both his staff and clients to stay at home. One of
those lightning moments came when Liu realised that buying and selling
online might be far more reliable and work well in a country as big as
China. He closed his stores, raising money from his family, who were
involved with shipping coal, and set up his first site, adding good
quality consumer goods alongside the electronics. He also shortened
Jingdong, which is a combination of his given name, Qiangdong, and the
name of his girlfriend at the time, to JD.

He says his secret is to give his customers quality with authenticity,
and being able to spot before others that the growing Chinese middle
classes wanted more than cheap, fake products. It’s why he has taken
such a tough line of zero-tolerance to counterfeiting, marking him out
from rival retailers.

Why Topshop is falling out of fashion with the Instagram generation