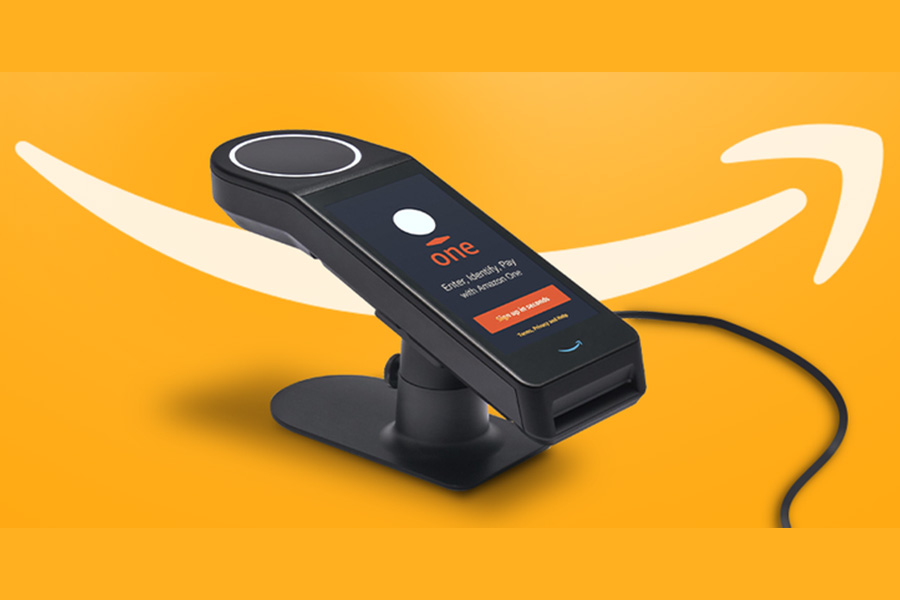 Amazon has strayed far from its bookstore origins to become an everything enterprise, with products from cloud tech to masstige streaming series. Some recent experiments have clearer IRL retail applications than others—like Amazon One, a palm-scanning payment system that emerged from stealth mode last September.

Contactless payments like Amazon One could speed up store checkouts, but consumers worry they could expose personal data. It’s tough to gauge Amazon One’s viability with only corporate blog posts to reference, however.

When Amazon One finally arrived at an East Coast Amazon Go store, we knew we needed to try it ourselves. At the very least, we could see whether Amazon One delivered on its convenience promises.

So I (Halie) handed Amazon my biometric data at a Midtown store last week. For journalism.

Here’s how Amazon One works in theory: At the front of the store, shoppers stop at a kiosk where they insert their credit card. A sensor scans their palm, using computer vision to codify each vein and ridge on their hand. The image is launched into Amazon’s cloud as an encrypted, unique palm signature, linking the shopper’s credit card info to their handprint.

After the first palm reading, customers can scan their hands to enter the store aisles, pick up their items, and exit without any cashier small talk.

In practice: For me, the hardest part of registering for Amazon One was taking a one-handed video of the sign-up process. The second hardest part was doing so under the withering side-eye of the store attendant.

The registration zipped by in seconds. I inserted my card, then held my hand above the scanner until a check mark on the screen confirmed my print had been processed.

Then came the moment of truth: using my palm print to enter the transparent gates separating me from Amazon Go’s snacks and groceries. Just like registration, heading into the aisles happened in a blink.

This Amazon Go didn’t have much inventory to choose from at 5pm on a Monday. I grabbed a can of sparkling water and Swedish Fish, because health is wealth.

To take my bounty home, all I had to do was walk out the automatic gate—no extra scans required. Total time in the store? Five minutes, tops.

On the subway home, I received a text saying that I’d signed up for Amazon One, with a link to review my receipt on my Amazon account. My bank history also displayed minimal deposits and withdrawals from Amazon, a safeguard for processing my purchases.

I can now say Amazon One is convenient. But is it a scalable—and safe—retail payments solution?

US shoppers are generally wary of trying new payment methods, Toplin said, and even more skittish when the shiny new tech involves biometrics. And the hesitation is global: In a May Mastercard study, only 37% of global consumers said they were very or somewhat comfortable trying biometric payments.

But winning American consumers’ trust isn’t impossible. Skeptics aside, the global biometric payments market is expected to expand 36x between 2018 and 2027, reaching ~$15 trillion, according to ResearchAndMarkets data.

Toplin reminded us that other tech companies have persuaded users to trust body scanning tech, like Apple’s Face ID. That’s a promising precedent for Amazon One, she said, if Amazon marketers can launch a successful consumer education campaign.

What about scale? Retailers may view Amazon One tech as their ticket to fewer lines and higher store traffic, shortcuts to boosting revenue. Or retailers may try to develop a proprietary palm pilot of their own.

After all, Amazon is most retailers’ rival…and not first on their data sharing lists.

“It’s hard to say whether the market leader is going to be Amazon, outside Amazon’s network, or if other players are going to jump into the ring,” Toplin said. After all, Amazon One is only nine months old, and limited to the Amazon Checkout Universe (21 Amazon and Whole Foods stores for now).

For its part, Amazon hasn’t shared specific information about possible Amazon One licensees beyond “active discussions with several potential customers.” (The company declined an interview request to elaborate on the tech.)

But Amazon has persuaded retailers to buy in before. Airport giant Hudson is using Amazon’s “Just Walk Out” tech, which lets shoppers do just what the name implies, at Dallas Love Field and Chicago Midway airports. “Just Walk Out” first debuted in Amazon Go stores—the same testing ground as Amazon One.

European retail: About You IPO pairs fashion with tech

Rent the Runway Interviews Banks for U.S. IPO This Year