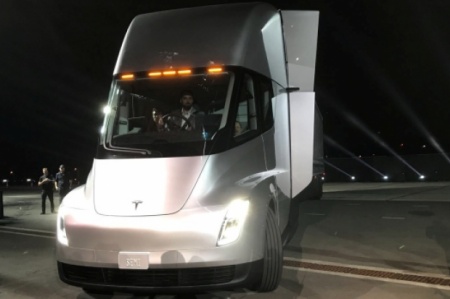 Canadian grocer Loblaw has ordered 25 of Tesla’s all-electric Semis, as part of an effort to move its fleet of delivery trucks to low-emission vehicles.

It joins Walmart and U.S. trucking company J.B. Hunt in committing to try the new technology as an alternative to diesel.

Tesla unveiled the Semi, a Class 8 truck with a range of of 800 kilometres at maximum weight at highway speed, on Thursday.

The Semi can recharge the battery enough in 30 minutes to go 640 kilometres, according to Tesla founder Elon Musk. That compares to diesel trucks capable of travelling up to 1,600 km on a single tank of fuel.

Musk promised to build a global, solar-powered network of “megachargers.”

As part of its commitment to reduce its carbon footprint 30 percent by 2030, Loblaw has said it will eventually make all its corporate-owned trucks electric.

It has also bought another semi truck, made by BYD, the world’s largest manufacturer of electric vehicles, which is soon to open a plant in Canada.

Tesla hopes to have the trucks to market by 2019. It has not revealed the price of the trucks, but said it believes they will be cheaper to operate than diesel.

Walmart told CNBC it wants to test how the technology performs in its supply chain. It has ordered 15 of the trucks, including 10 to be used on Canadian roads.