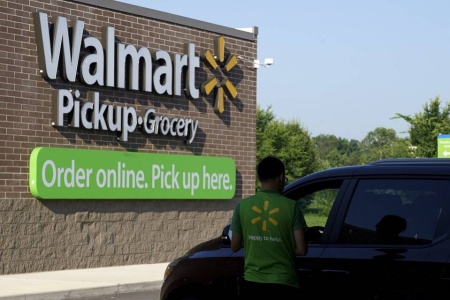 In the final weeks before Christmas, Walmart is making its biggest push yet for the company’s order online, pick up in store service.

This holiday season, the big-box retailer will qualify more items on Walmart.com for same-day pickup in stores than ever before, Walmart announced Friday. The company continues to tap into the 90 percent of Americans who live within 10 miles of a Walmart store.

Walmart said it sees demand for same-day orders doubling during the final two weeks of the holiday shopping season, when the retailer’s massive stores transition into mini fulfillment centers for “millions” of online orders.

As procrastinators across the country look to finish their holiday shopping in a pinch, buying online and picking up in store allows shoppers to bypass waiting on a last-minute order to be shipped, and also can guarantee inventory is in stock before trekking to a store.

In the coming weeks, Walmart customers will be able to shop items noted “Free Pickup Today” on Walmart.com until 4 p.m. on Dec. 23. Those orders can then be picked up in stores until 6 p.m., local time, on Christmas Eve.

This is one service internet juggernaut Amazon hasn’t yet been able to compete with in the same size and scale. In buying grocery chain Whole Foods, Amazon added about 460 physical stores to its portfolio, from which it’s begun selling the Echo and other Alexa-enabled devices, and set up Amazon lockers. But that still pales in comparison to Walmart’s roughly 3,500 U.S. supercenters.

Meantime, other major brick-and-mortar retailers including Target, Kohl’s and Best Buy are making the buy online, pick up in store experience more convenient for shoppers. Many of these companies are also expanding their digital assortment of merchandise.

Over the past year, Walmart has tripled the number of items on Walmart.com to reach more than 70 million items today, and some of that growth stems from unique relationships with well-known brands.

Last month, the company announced an upcoming partnership with Hudson’s Bay‘s Lord & Taylor, where Walmart.com will feature a “store within a store” for the department store chain’s nameplates.

Also new this holiday season, Walmart will be stuffing unloaded gift cards in some boxes of orders placed online, encouraging shoppers to load funds on them if they need another last-minute gift for friends and family.

Amazon has made a similar push in Whole Foods stores, where it recently added cardboard displays for its own gift cards. Overall, gift cards are expected to be top of many consumers’ wish lists this year.

Lego, Disney And Lululemon Are Winning At Retail