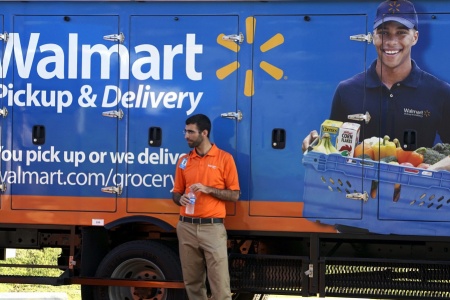 Walmart Inc will expand its grocery home delivery services to reach more than 40 percent of U.S. households, or 100 metro areas from an existing six, as the retailer steps up a fight against rival Amazon.com Inc.

The extra cost may hit Walmart’s bottom line, but increased spending on grocery delivery is seen as essential in the fierce battle for online orders for food and household staples.”It is an absolutely necessary step for them to take in terms of their ability to compete with Amazon in particular,” said Ken Perkins, founder of research firm Retail Metrics.Walmart said on Wednesday the service would be rolled out by the end of the year. Deliveries will cost $9.95 with a minimum $30 order and companies like Uber Technologies Inc [UBER.UL] will provide transport. Other delivery companies will be added later this year.The move will complement Walmart’s rollout of curbside grocery pickup, which is currently available in 1,200 stores and will be added to a 1,000 more stores this year. It also allows Walmart to compete with Amazon’s two-hour Prime Now service for shoppers of its loyalty program.The expanded service should help the Bentonville, Arkansas-based retailer to get more of its store shoppers to buy items online, where they spend twice as much.Intense competition is sweeping the grocery market, following Amazon’s purchase of Whole Foods last year.Rivals are also expanding delivery options. Amazon recently debuted free two-hour Prime Now grocery delivery from Whole Foods in four cities, free for its annual $99 Prime subscribers.Kroger Co, the nation’s largest supermarket operator, has home delivery from more than 872 stores across the United States, and this week expanded its partnership with delivery company Instacart.Amazon, the world’s largest online retailer, has amassed an 18 percent share of the $12.6 billion U.S. online grocery market, mainly through the sale of packaged goods such as pasta and diapers. It is the largest player in a sector that is expected to grow to $41.7 billion by 2022, according to market research firm Packaged Facts.Walmart is No. 2 with 9 percent, followed by Ahold USA’s Peapod with 7 percent, FreshDirect with 6 percent and Instacart at 5 percent.Online revenue growth slowed at Walmart in the most recent quarter, causing some analysts to question its strategy to compete with Amazon. Company officials said Walmart was still on track to increase its e-commerce sales by 40 percent this year.