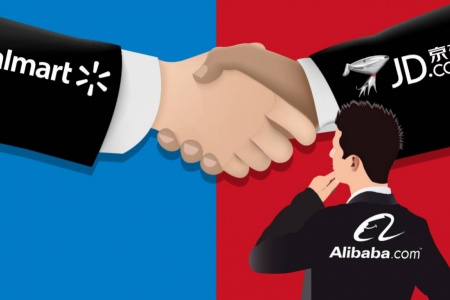 JD Worldwide’s new Wal-Mart store front, launched Thursday in Beijing, promises two-hour delivery to shoppers who live within miles of 20 Wal-Mart stores around China, with the number of outlets expected to double by the end of 2016, according to a JD.com announcement.

Shoppers can buy a range of imported products, ranging from American vitamins to Japanese hand cream, the statement said.

Wal-Mart bought 5.9 per cent of JD.com in June, agreeing to ally itself with China’s second-largest e-commerce operator to reshape its retail business in the country to catch up with the increasing trend of consumers doing most of their shopping online. Under a pilot project, JD.com said it would explore the feasibility of delivering products using drones for customers in remote areas.

The US retailer raised its stakes in JD.com to 10.8 per cent this month.

Alibaba, operator of the world’s largest online shopping platform and owner of the South China Morning Post, will host its Singles’ Day on November 11, a 24-hour shopping festival that’s expected to surpass last year’s tally of US$14.3 billion in transactions.

In allying with Wal-Mart, JD.com has set its sights on competing with Single’s Day.

Target outranks all other U.S. retailers in solar capacity

EBay , how to lure New Customers