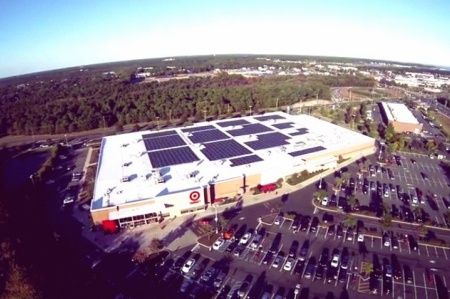 Target now has 147.5 megawatts (MW) of installed solar capacity, according to the Solar Energy Industries Association’s 2016 Solar Means Business report, which ranks companies based on capacity current through the third quarter of this year.

It’s the first time Target has grabbed the number one spot in the report’s five-year history. The discounter has added nearly 70 MW of solar so far in 2016, more than any other U.S. retailer.

“We’re incredibly proud of the progress we’ve made in improving building efficiencies and reducing environmental impact,” said John Leisen, VP of property management at Target. “Our commitment to installing solar panels on 500 stores and distribution centers by 2020 is evidence of that progress.”

Walmart finished close behind Target, taking the No. 2 spot with 145 MW of installed solar capacity.

“Solar plays a vital role within our renewable energy portfolio,” said Mark Vanderhelm, VP of energy for Walmart. “This is evident by our 2020 commitment of doubling solar energy projects at our Walmart stores, Sam’s Clubs and distribution centers across the nation. Our focus is on finding those solar projects that are right for the business.”

“These blue-chip companies are proof that sustainability and profitability is not an either-or proposition,” said SEIA’s interim president Tom Kimbis. “Investing in solar is a common-sense decision that pays dividends for both the environment and companies’ bottom lines and these leaders deserve a big round of applause.”