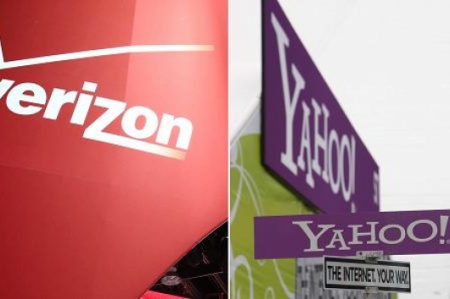 The deal, which was reached over the weekend, unites two titans of the early internet, AOL and Yahoo, under the umbrella of one of the nation’s largest telecommunications companies. Verizon bought AOL for $4.4 billion last year. Now it will add Yahoo’s consumer services — search, news, finance, sports, video, email and the Tumblr social network — to a portfolio that includes AOL as well as popular sites like The Huffington Post.

The fate of Yahoo’s chief executive, Marissa Mayer, who came under sharp shareholder criticism for failing to arrest the company’s long downward spiral during her four-year tenure, is unclear.

In an interview, Ms. Mayer said, “I plan to stay. I love Yahoo and I want to see it into its next chapter.” But she and Tim Armstrong, the chief executive of AOL, said it had not yet been decided if she would have a role at the company after the deal closed in early 2017.

If she is terminated, she will be due severance of about $57 million. If she received that payout, her total compensation from Yahoo for her service so far would be about $218 million, according to the compensation research firm Equilar.

Verizon, which has a vast amount of information about its customers’ internet use, hopes the combination will help it create a strong No. 3 challenger to Google and Facebook for digital advertising revenue.

Mr. Armstrong said the acquisition strengthens Verizon’s offerings to advertisers and consumers and gives it much more scale, since Yahoo claims one billion users who visit at least once a month.

“This deal is a leap forward from serving millions of customers to billions,” Mr. Armstrong said in an interview. “Yahoo is one of the most powerful brands on the planet.”

Verizon plans to keep most of Yahoo’s current products, including its still popular email service, and invest in them to make them stronger. “Our strategy is to structure ourselves as a house of brands,” Mr. Armstrong said. However, he said that Verizon has not yet decided what it wants to do in search, an area where Yahoo has waged a losing fight against Google for a decade.

The Yahoo purchase carries risks for Verizon, which is well known for its wireless phone and internet services but has little experience in the cutthroat business of digital content. Analysts say that its purchase of AOL has yet to prove its value, although Mr. Armstrong is a well regarded operator.

Yahoo’s leadership team, led by Ms. Mayer, spent the last four years trying to create a viable stand-alone strategy for the company without much success. Its market share among web users and advertisers had fallen, and Yahoo recently acknowledged that its $1.1 billion acquisition of Tumblr, a blogging network that was supposed to help Yahoo attract younger users, was worth about one-third what it paid.

Ms. Mayer said Verizon would help Yahoo get better distribution for its mobile apps in areas like search, mail, news, weather and sports. Verizon, she said, could promote Yahoo services on its smartphones and in its retail stores.

Although many on Wall Street have strongly criticized her, Ms. Mayer defended her tenure in an email to employees.

“We set out to transform this company — and we’ve made incredible progress. We counteracted many of the tectonic shifts of declining legacy businesses, and built a Yahoo that is unequivocally stronger, nimbler and more modern,” she wrote.

Verizon agreed to pay an extra $1.1 billion on top of the purchase price to cash out Yahoo employees’ restricted stock upon the close of the deal, Yahoo said. Many employees, particularly the senior executives, are also entitled to large severance packages if they are fired by Verizon.

The sale of Yahoo’s business ends the company’s 22-year run as an independent entity. Founded in a trailer in 1994 by two Stanford graduate students, it was the front door to the web for a generation of internet usersbut failed to keep up with Google in search technology and then missed the social media and mobile revolutions.

“It does mark the end of a particular time period for the company,” Ms. Mayer said. “That said, there are great opportunities for Yahoo, for the brand, for the services, with Verizon.”

The sale, which still must be approved by Yahoo shareholders and regulators, also does not include Yahoo’s cash and its noncore patents, which it is trying to sell separately.

Yahoo was under pressure from shareholders to find a way to unlock the value of its Asian investments, and the sale of its core operations to Verizon was the first step.

“For investors, this came to the expected conclusion: Verizon was the front-runner very early on,” said Robert Peck, an analyst with SunTrust Robinson Humphrey. “The real question for investors now is what’s next? Will Yahoo have an efficient liquidation of the Asian securities?”

How Brands Are Testing Virtual Reality