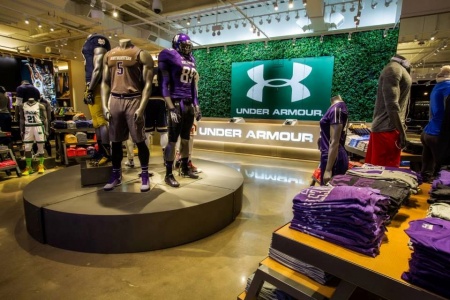 On a conference call with investors following its second-quarter earnings report, Under Armour CEO Kevin Plank said the athletic wear company would be moving into the 53,000-square-foot flagship store as soon as 2018. It’s part of the firm’s strategy to use “landmark retail space” to tell the Under Armour story and build its brand and sales.

Under Armour likewise confirmed rumors that it would expand its distribution in 2017 into Kohl’s, where competitor Nike already sells its merchandise. Though Plank said the partnership has been in the works for years — emphasizing the deal was not signed in reaction to The Sports Authority’s bankruptcy — it should help plug a hole in the company’s revenues.

The sporting goods chain’s liquidation caused Under Armour to slash its full-year revenue forecast in May to $4.93 billion from about $5 billion. Under Armour reiterated that guidance on Tuesday, though its third-quarter forecast came in short of analysts’ expectations. The brand will initially launch at 600 Kohl’s stores before expanding to all 1,100 locations.

Plank emphasized that bringing Under Armour into the mid-tier department store chain shouldn’t be viewed as a decision to take the label downmarket, adding that the company will “continue to have elevated product in there.” Instead, it’s a “big opportunity” to connect with the female shopper who has been looking for the Under Armour brand at Kohl’s stores. Plank reiterated that the company is on track to expand its women’s business to $1 billion this year, and said the push into Kohl’s should not dilute its margins.

Indeed, launching at Kohl’s could be lucrative for Under Armour, as activewear accounts for $3 billion of the department store’s annual sales. On Kohl’s first-quarter earnings call, CEO Kevin Mansell said performance from Nike “continues to be very strong,” adding that its comparable sales grew by a mid-teens percentage during the quarter.

“Ultimately, we believe this will prove a fruitful partnership for Under Armour and greatly expand its distribution network,” Jefferies analyst Randal Konik told investors. “That said, for now the jury is out on whether Kohl’s will be additive to the bottom line or merely fill in for the loss of The Sports Authority.”

As for the forthcoming Manhattan flagship, Plank said the massive store — which FAO Schwarz exited last year because of its pricey rent — will fuse experiences with traditional retail. The average asking rent for ground floor space along the area of Fifth Avenue where the store is located was $2,980 per square foot in the second quarter, according to Cushman & Wakefield.

“We think it’s a great platform for the brand,” Plank said.

Aside from growing its retail and wholesale footprints, Under Armour likewise plans to use its forthcoming expansion into sportswear as a means to power revenues. The company will launch this category in September.

Under Armour on Tuesday said net revenues rose 28 percent to $1 billion during the second quarter, though its net income fell 58 percent to $6 million. That was mostly because of a $23 million impairment charge tied to The Sports Authority’s liquidation. Under Armour’s gross margin also contracted due to growth in its lower-margin footwear and international businesses.

The company’s shares were wavering in a narrow range Tuesday morning.