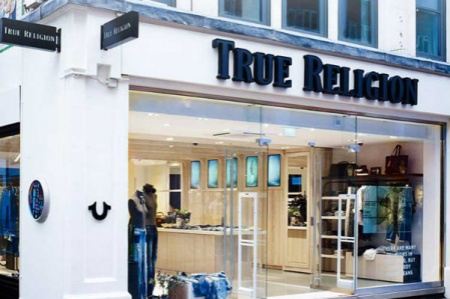 This kinetic ad campaign emulates the constant innovation and movement of the California-based denim retailer that launched a new London location on Carnaby Street on Wednesday.

The “small, intimate and bright” bi-level store is a space that exemplifies “phygital” retail as CEO John Ermatinger told Retail Gazette. Here, the physical bricks and mortar space goes hand in hand with digital advancements to give each customer an extremely personalised experience.

While some have referred to the store as London’s flagship, Ermatinger preferred to acknowledge the new site as a “primary location” for True Religion in the UK.

The 2,502 sq. ft. store spans over two floors separating men’s apparel on the ground floor and women’s and children’s in the basement.

Discussing the importance of conversation between customers and the brand, Ermatinger stood by the new “denim bar”, a table showcasing a range of True Religion jeans designs including those with its prominent Super T stitch. Comparing the platform to a “kitchen table” the CEO emphasised that the new space is not only for sales but also conversation between brand reps and consumers.

While True Religion’s new concept stores have been trialled in the US, Carnaby Street is the UK’s first. Its futuristic retailing methods will definitely excite tech-savvy shoppers and allow each customer to receive a specifically tailored service.

Each in-store employee fashions the Band for True Religion – an Apple Watch on which visiting customers’ purchase history can be accessed along with purchase recommendations and access to more products from around the world. Further, iPad’s, referred to as The Black Book contain a more detailed history of consumers’ True Religion products and enables employees to send personalised messages to shoppers.

Its new features are where “phytgital” retailing comes to life, enabling a seamless and personalised retail process.

The store also landscapes five digital screens on the ground floor which run True Religion advertising campaigns. “The “Digital Runway is on even at night. It’s to catch people’s eye, and looks like there’s always something happening in the store”.  The store continually remains alive and moving “nothing is static in the store, constantly moving, that’s how we all live” notes CMO Tara Peyrache.

Scanning through the store Peyrache, True Religion’s Chief Marketing Officer noted that the store “still remains true” to the brand and that it has brought back products from the archives that “have been in the history of the brand since its inception”.

Similarly, while discussing his history as General Manager at Nike and originally President of the Americas at Levi, Ermatinger noted that he aims to “preserve the history of the brand” while looking to and moving with the future. The Chief Exec also expressed his excitement about the business saying “I’m very glad to be back in the denim industry and in another founder-owned business”.

The store is all things new for the brand and also offers one off True Religion clothing and accessories which cater to the denim retailer’s varied audience.