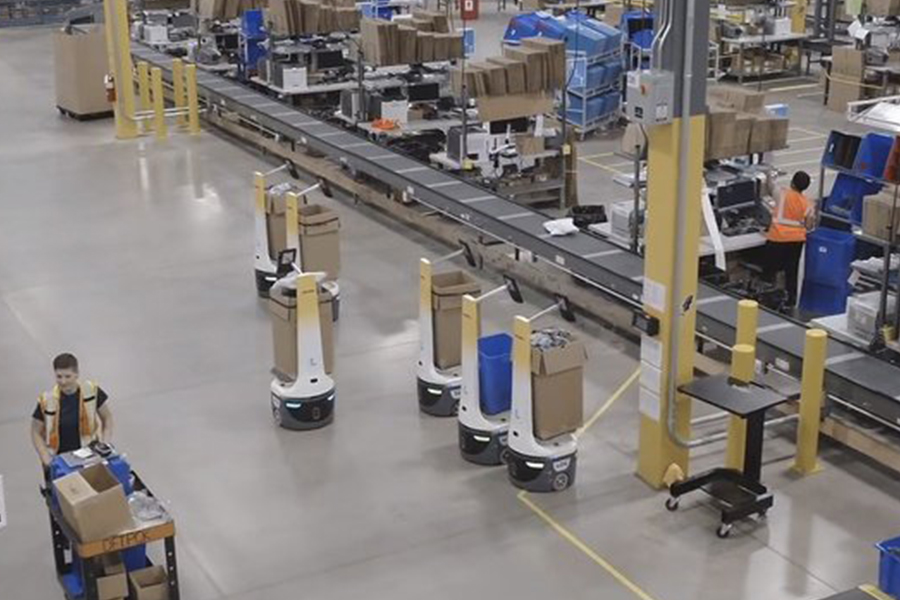 Further investment in robots is one way companies are boosting fulfillment center productivity, as orders get processed closer to the point of delivery in a new era for retailers. The COVID-19 pandemic introduced a surge in online sales, but an e-commerce order brings added fulfillment costs with it.

“Whether it’s buy online and pickup at store or delivery, we’re seeing retailers struggle with maintaining margin,” Marian said. “In many cases, it could only be $1 that they’re making on a product. In many cases, it’s not profitable.”

Boosting margins in an e-commerce-driven environment is a big reason for the increase in robotics interest, Marian said. Robot orders in the food and consumer goods industries were up 32% YoY in Q1, according to the Association for Advancing Automation, compared to a 20% increase across industries overall.

To make picking, packing and delivery operations less costly, Walmart announced in January it would add automated micro-fulfillment centers to dozens of stores and work with tech providers like Alert Innovation, Dematic and Fabric. And Kroger is using Ocado robots at fulfillment centers in Florida to pick orders that get loaded onto a delivery vehicle or truck, betting that it’s a better investment than building new stores.

The pressure to keep up with Amazon’s fast, decentralized fulfillment network and difficulties finding workers has further bolstered the case for smart robot investments, said John Seidl, a partner at GreyOrange. According to Seidl, one GreyOrange client — an auto parts retailer — said it increased wages by 30% in its stores and warehouses but still couldn’t find enough workers, according to Seidl.

“It drove all sorts of activity for us early this year, related to dark stores and microfulfillment and store backrooms — and even store frontrooms — for buy online, pick up in store stuff,” Seidl said.

This is leading clients of robotics firms to become more aggressive in their implementation plans, such as reducing the time a pilot program for new robots is in place.

“The big accounts, quite honestly, it’s a little terrifying actually how fast they want to go and how much they want to do,” Seidl said.

With the heightened demand for robots in the fulfillment process, Marian said it’s fair to say that more than two retailers could have robot resource organizations, even if they don’t call them by that name. Mike Futch, CEO and President of Tompkins Robotics said that process is already taking place, with large retailers and parcel carriers establishing innovative engineering teams and some grocery chains setting up microfulfillment teams.

“They have different names in different places, where they’ve said to some guys, ‘Research everything that’s out there, figure out what we need to do, vet everything, bring the top solutions to the table and figure out how we can combine technologies to automate more steps in the facility,” Futch said.

What tools do retailers need to better integrate hospitality in store?