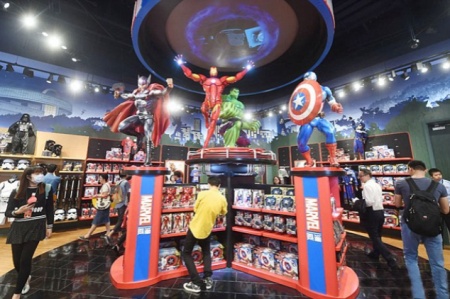 When China’s first-ever Disney Store — the largest store to date — opened last May, it was on par with Backstreet Boys dropping by TRL in the late ‘90s. Between heavens-bound skyscrapers in the Lujiazui financial district area of Pudong, Shanghai, the line snaked back and forth for over one mile with customers waiting eight hours for the doors to open.

The store takes up 54,000 square feet, which the The Los Angeles Times smartly equates to “about a third of the size of a CostCo”. Only there are no $1.35 cones of soft-serve, no endless aisles lined with five-pound containers of snack mix, and not even any shopping carts, because no one will be buying more than they can carry. There just isn’t that much in the store. The shop itself feels confoundingly small, offering a curated selection of keychains, jewelry, school supplies, and on display up front, a variety of Tsum Tsums, the small, stackable pellet-shaped character plush for which the obsession among collectors is likely to soon reach Beanie Babies-status.

The store is, in a way, remarkably unremarkable. While it’s located in the somewhat ominous shadow of the Oriental Pearl Tower, one of the tallest structures in Shanghai, its interior could be anywhere else in the world, in any decade. This Times story from 2009 noting store features like magic mirrors and digital components freakily resembles the one announcing Shanghai’s opening six years later. The lucite cut trees in that photo, taken from the same year Kanye ripped a moonman from Taylor Swift’s hands? They’re the same in the Chinese flagship today.

Its biggest-ever sizing gets a hefty boost from a large outdoor courtyard, with a Mickey-shaped flower garden and a distinctive Glockenspiel clock tower which lights up at night like one of those fun party cabs or a wedding dance floor, with LED lights dancing while tertiary colors are shone onto its exposed clock gears. Passersby on the pedestrian bridge above or within the plaza itself watch as miniature characters like R2D2 and Woody and Mike Wazowski twirl and spin to Disney instrumentals atop the 60-foot tower a couple times per hour. (It’s worth noting that the majority of these featured characters are from the Pixar, Marvel, and Star Wars end of the company, some of the characters more familiar to Chinese audiences.)

The merchandise often differs from what’s sold in or nearby the parks, which isn’t coincidental. World of Disney, the massive, souvenir-packed shops outside most Disney parks worldwide, offers glittery princess t-shirts, fanciful crystal trinkets, and plenty of other goodies you won’t see unless you often get within walking distance of a carousel. World of Disney stores are operated by Disney Parks and Resorts, the same people who run Disneyland and Disney World, while Disney Stores are run through Disney Consumer Products, who handle merchandise licensing and development. (Sadly, neither sells Mickey-shaped ibuprofen for the explainer headache I just caused.) A train ride away from the world’s biggest Disney store is another enormous, possibly larger Disney store, filled with different keychains, unseen posters and limited edition purses — but that one gets none of the glory.

It’s because of this that the majority of this Disney Store doesn’t really sell anything, except the concept of Disney as a whole, which may very well be the point. Here in China, that’s exactly what Disney needs, given a five billion-dollar park opening this past June and the possibility that local residents may not understand Disney characters, recognize their authenticity, or respect Disneyland’s grounds in the same nostalgia-tinged way we do. Simply the idea of acknowledging Disney in such a big way — with, say, a large-scale Mickey emblem on the roof intended for guests on nearby observation decks to spot below — is of utmost importance. Whether you’re passing through on the bridge overhead, peering out from a skyscraper above, or sitting with friends on their plentiful benches, the glimmering lights, clocktower’s song, and those three interconnected circles will all calmly draw you in, quietly making you consider from the street or sky what a trip to the real Disneyland could be like.

In designing his parks, Walt Disney always placed emphasis on “the weenie,” a large-scale visual sight like the Matterhorn Bobsleds mountain that draws people in. Here, the same rules apply, but on a more pedestrian level. There’s plenty to take selfies with, whether it’s the bronze Donald Duck statues, Marvel artwork, rotating set pieces out front, or sleepy-looking stuffed animalsinside.The clocktower’s instantly recognizable Mickey Mouse clock face, reminiscent of the classic Ingersoll watch, is a direct duplicate of the one telling time from Shanghai Disneyland’s entryway. In fact, the same designer was behind both this cheerful music-chiming tower and the oversized railroad-like entrance at Shanghai Disneyland Resort, the only thing non-ticketholders can see from its front gates.

And there, in the center of Shanghai’s Disney Store is a walk-through homage to Cinderella Castle, resembling the blue-turreted figure at the opening of every Disney movie. It’s small and sparse, almost quaint, but it serves its exact purpose: piquing your interest without a purchase of a park ticket. All Disney stores tend to be this way, and this one is no different. Even as the world’s biggest, Shanghai’s Disney Store is never as awe-inspiring as the actual park, but it’s enough to give you a taste and a desire to see the real thing.

Adidas dethrones Under Armour as No. 2 sports brand in US