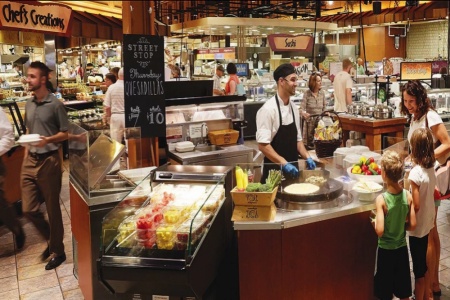 Supermarkets aren’t generally the sorts of things that generate
massive, dedicated fan bases. Certainly most shopper have a preferred
grocery store (or at least one they tend to frequent more often than
others) — but in general, it is not something most people talk all that
often about since on the whole shopping for groceries doesn’t register
all that highly on the excitement meter.

Humans have to eat, which means they have to buy food at least
sometimes, but generally speaking, wandering the market to fulfill that
need is more felt as a chore than as a good time had by all. Much of the
appeal of services like Prime Fresh and Instacart is in fact built into
that basic dislike of going to the grocery store.

Wegmans — a 92-store chain based out of Rochester, N.Y., however — is
a very different sort of grocery animal. Wegmans doesn’t just have fans
— Wegmans has devotees. When its first Massachusetts store opened last
year, 2,000 people lined up to get inside. Consumers have been known to
write open love letters to Wegmans imploring them to open up operations
in their state or town. The Wegmans Twitter group — #Wegmania — is quite
possibly the most upbeat place on the internet.

So how did a little chain, with less than 100 stores spread across
six Eastern states, become something of a grocery wunderkind in a
suddenly very competitive environment? What makes Wegmans so special?

There is something a little bit off about call Wegmans’ “small” since
each individual store is massive. That is terms of both raw square
footage — a small store is 74,000 square feet — and in terms of
selection, as each store carries 50,000 to 70,000 items.

As for what it does with all that extra space, the typical Wegmans is
designed to be a bit like a supermarket and (according to its company
spokesman) a bit like a European food hall where customers can watch
their food being freshly prepared in the market. On offer in your
average Wegmans: a cheese shop, a pasta station, a sushi bar, a pizza
shop, a sub shop, organic salad bar, and, in some cases, a sit-down
restaurant.

And of course what Wegmans stocks and how it
prices are a big factor. Wegmans stocks organic and local products
heavily, some produced from its own organic farming complex, as well as
stored-owned brands (à la Trader Joe’s), and is actually the nation’s
largest seller of gluten-free goods. But unlike other grocers known for
their high-end pricing — Whole Foods, for example — Wegmans is known for
having lower-than-average pricing than their competitors — 10 to 17
percent lower, depending on whose figures one uses.

So how is Wegmans going big — and spending less? That leads to the other thing Wegmans is good at.

Unlike many of its competitors, Wegmans has a mostly
vertically-integrated supply chain that allows it to control the
distribution process, which is a lot of how it keeps it costs so very
low.

The integration includes warehouses — which it owns as opposed to
leasing — and full control of its distribution. It even grows its own
food on the aforementioned organic farm. Moreover, Wegmans is more a
turtle than a hare when it comes to its expansion plans — slow and
steady wins the race — which means it restricts its footprint to six
states and rolls out new locations extremely slowly (by normal retail
standards).

That is because Wegmans’ staff is more extensively trained that
anyone else in grocery, which the chain says is key to its consumer
relationships since its lower turnover creates a staff that is on the
whole more expert, attentive and popular with its customer base.

Wegmans has also invested a good deal in digital improvements in its
back end. A 2006 upgrade put data synchronization with local and
national suppliers in place — which, according to an internal report,
improved supply chain efficiency to the tune of $1 million in labor and
inventory costs.

That big savings reportedly pushed a 7 percent increase in
productivity from store delivery process improvements. Suppliers also
saw direct improvements, including a 75 percent reduction in speed to
shelf for new items and a decrease in inspection time by five minutes
per order. Suppliers like it — they move more goods more efficiently —
and Wegmans loves it because their short-cycle delivery times mean they
have less food waste than almost anyone else in the industry. Wegmans
overturns fresh inventory 100 times a year, compared to 20 for
competitors.

Wegmans, of course, is a small fish in a pond that is becoming
increasingly crowded with players of all stripes. Even Amazon is
building its own grocery stores. But Wegmans has something that almost
no one else has — which is an actual, honest-to-God fanbase who would
rather shop there than anywhere else.

Maybe slow and steady can actually win this race.

Tmall and the physical fitting room