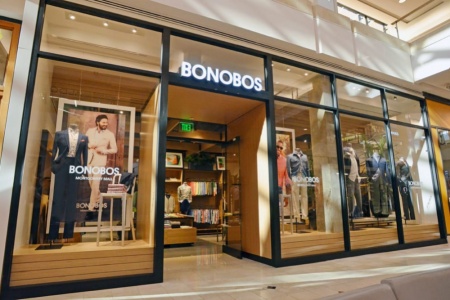 These definitive results motivated us to take an even closer look at the logic behind the Walmart-Bonobos deal. We wanted to make sense of the outsized influence of the brand’s showroom strategy. After all, Bonobos led the way for a bevy of digital-first brands, such as Warby Parker, Everlane, Dollar Shave Club and Casper. Each company has upended a staid product category, from eyewear to mattresses, with a digital-first model.

Bonobos was launched a decade ago by entrepreneur Andy Dunn and another Stanford M.B.A. grad, Brian Spaly. The pair went to market with a deceptively simple business model: Sell a better pair of chino pants over the Internet. Bonobos instead created something entirely antithetical to the merchandising model of traditional retail.

Bonobos calls its stores “Guideshops,” and they are small – usually only about 1500-square-feet. But the space is much more than a traditional store, it’s a fashion magazine spread come to life, a place to go shopping without the hassle and drawbacks of traditional shopping. The Guideshops, 42 in all, are essentially showroom stores. After all, what a showroom is, what it does, and how it functions within consumer culture is complex and ever-evolving. And no one – not even Bonobos – has entirely figured out how to fully exploit this revolutionary strategy.

No wonder these inviting, transaction-free boutique zones are usually nestled in restive commercial districts – tucked among coffee shops, scented candle stores and craft breweries. These are the hangout zones of urban life, places where people go to see and be seen. These are social territories, or in other words, spaces where identity-formation and aspirational thinking dominates. Consumption happens, but it’s secondary. This is the essence of a showroom strategy: creating a space where desire and want rise above mere need and necessity.

This is an exceedingly simple, yet enigmatic, idea. Bonobos was born online. But it isn’t an e-commerce company first. It makes great pants and whimsical peacock shirts. But it doesn’t do any of this via a legacy model of retail.

Bonobos can’t compete with Walmart’s scale, but it has long beaten the chain in one key metric: sales per square foot, which is likely three times more than Walmart’s. With total square footage of about 71,000, and an estimated $100 million in annual sales, Bonobos may log $1408 sales per square foot, and some estimates go as high as $2000. That’s significantly higher than the typical menswear store in American malls, which range between $350 and $650 per square foot.

Walmart effectively bought a philosophy: The best way to build a brand is to create a superior physical product. But don’t try to sell that product in a traditional store first. Instead, start by selling your product with a digital-first experience. The influence of the showroom model will undoubtedly spur more innovation at Walmart. Showroom thinking is not just about apparel. For example, after the Bonobos deal, Walmart started Store No. 8, an internal venture focused exclusively on hatching new online retail businesses.

Showroom stores aren’t just the merchandising strategy of the future, but the store of the future. This raises a critical question for any retailer still sitting on the showroom sidelines: If even Walmart is getting on board in a big way, what’s stopping your brand?