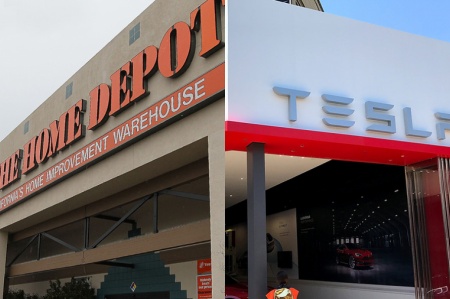 Tesla is ending its partnership with Home Depot and removing its branded kiosks from as many as 800 of the home improvement chain’s 1,980-some U.S. stores by the end of the year, according to Fortune.

Best known for its electric cars, Tesla began rolling out kiosks at Home Depot earlier this year that aimed to educate consumers as well as generate sales for its residential rooftop solar panels and energy-storing, rechargeable Powerwall battery. The kiosks were staffed with Tesla employees to give shoppers real-time rooftop solar and Powerwall storage recommendations using a home address and satellite imagery to estimate sunlight, shading and other rooftop factors, according to Fortune.

The decision to shut down the kiosks is a result of Tesla’s latest move to cut 9% of its workforce, which will sharply downsize its residential solar business, reported Reuters, citing three internal company documents and seven current and former Tesla solar employees as sources. Cuts to its solar business — which Tesla bought two years ago with the $2.6 billion acquisition of SolarCity — also include closing about a dozen installation facilities, according to Reuters.

Home Depot spokesman Stephen Holmes told Reuters the retailer’s relationship with Tesla will continue through the end of the year. Holmes also said that the retailer will continue a partnership with solar panel company and Tesla competitor Sunrun in an undisclosed number of stores. (A “Sunrun Solar Panel System” page within homedepot.com allows shoppers to request a free in-home custom quote and consultation for Sunrun solar panels.)

Considering Tesla had announced plans to expand its partnership with Home Depot as recently as February, Tesla’s move to end its relationship with the retailer blindsided many Tesla staffers, according to Reuters. Moreover, the Home Depot partnership generated about half of Tesla’s solar sales, Reuters reported citing current and former Tesla employees. “It’s an expensive account,” a former Tesla employee told the news agency, “but it does bring in all the revenue.”

GTM Research analyst Austin Perea also told Reuters he estimated the partnership has recently accounted for about half of Tesla solar sales, partly due to previous Tesla moves to cut back on other sales and marketing costs. However, since retailers take a cut of each sale, such third-party retail partnerships are among the most expensive means of generating revenue, according to the clean energy research firm.

Why Go to a Store Anymore?