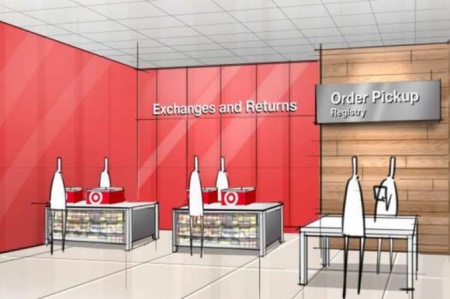 With this new store, Target is embracing a strategy that diversifies the store experience to appeal to different types of shoppers, and these new features give us a hint at where the mass merchant’s priorities are. In particular — with grocery.

Grocery is by no means Target’s bread-and-butter, so to speak: The category only makes up about one-fifth of the retailer’s annual sales. Since its debut, Target grocery has been more of an afterthought for the company — a convenient way for shoppers already picking up apparel, home decor or cleaning supplies to make quick “fill-in” trips while they’re already at the store. But CEO Brian Cornell acknowledged earlier this year that those pickups are eroding, and it’s time for a new model.

Grab-and-go has increasingly been emphasized at new Target stores this year. The retailer will build 32 new stores before the end of the year, many of them small format stores about a quarter of the size of the ‘next-gen’ store. With limited space, these stores are highly focused on raking in data that show what local customers want from that store and adapting the assortment to match. And for some — like a new store just outside of the University of California’s Irvine campus — grocery makes up a third of the mix.

As the fierce war on price escalates between Walmart, Amazon and Target — Target is doubling down on its differentiated ‘Tar-zhay’ image. This year, Target has rolled out 12 new private label brands, including lines that cater to children with disabilities as well as lifestyle brands that aim to create an emotional connection with shoppers and hit on key category trends like athleisure, trendy home decor, women’s classics and modern menswear. The move is part of Target’s broader effort to rethink its brand assortment and will include shedding stalwart brands such as men’s and women’s Merona brand and men’s Mossimo line, which have grown too homogenized for consumer tastes.