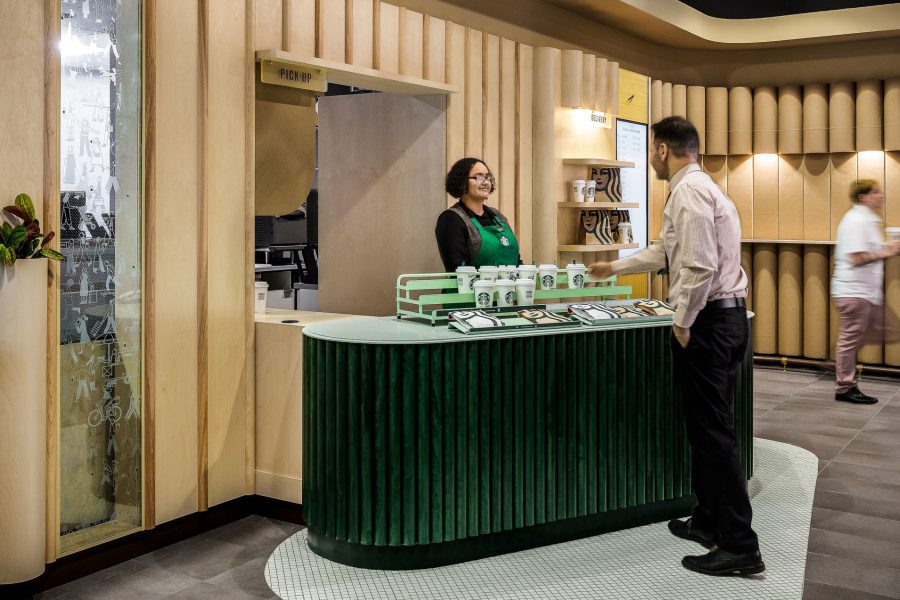 “Our customers who are on-the-go have told us that connection and convenience are important to them.” said Starbucks Vice President of Urban Markets Katie Young. “By designing a store specifically for the mobile order occasion, we can deliver both for these customers using the store’s design, location and the expertise of our baristas.”

Diners who visit the location, which Starbucks describes as the “first-of-its-kind,” make and pay for their orders via the Mobile Order & Pay on the company’s mobile app. They can select “Starbucks Pickup – Penn Plaza” as the location and create their order using the full menu of Starbucks. Once the customers arrive at the store, they can monitor the progress of their order on a digital status board and pick up their handcrafted beverage as well as food from a barista.

For the design of Starbucks Pickup, the company began with a prototype at the Tryer Center, described as a center for innovation at Seattle’s Starbucks Support Center. At the center, teams focused on digital innovation, design and operations with baristas to “create an experience that not only met customer needs but gave store partners the tools they needed to deliver the best customer experience” per the company.

In separate news, Starbucks reported growth in the ranks of its rewards program membership as it continues to pursue new opportunities to expand digital customer relationships. The company saw active Starbucks Rewards membership in the U.S. expand to 17.6 million active members at the close the fourth quarter, which marked a year-over-year increase of 15 percent.