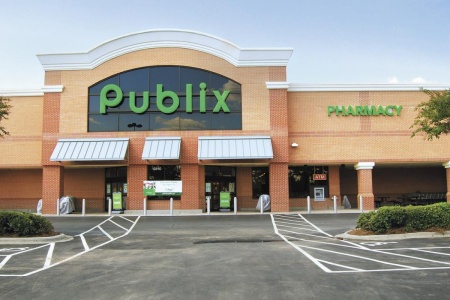 Publix Super Markets has never had to be particularly fancy or sophisticated to win over customers.

The Lakeland-based grocery chain has spent the span of several decades luring and retaining shoppers based on its stellar record for customer service. The Pub Subs and BOGO deals were always just the icing on the cake.

But in 2016, Publix began making a more vested effort in innovative new programs to keep up with a growing number of tech-savvy competitors that are slowly chipping away at the company’s stronghold in Florida and in new markets like North Carolina and Virginia. Whole Foods Market is rolling out new 365 grocery stores across the country, including in Florida, which have brew pubs and restaurants inside to lure millennials. Lucky’s Market lets customers drink wine and beer while they shop — shopping carts literally have cup holders installed on them. Safeway, which opened a store in Largo last year, has had Starbucks cafes inside stores for years and also delivers its own groceries to customers in a fleet of refrigerated trucks.

Last year, Publix announced its unprecedented venture into the grocery delivery business through a collaboration with Instacart, an app-based grocery delivery company. The service began in Miami last summer but has trickled into new markets, including Tampa Bay, throughout the year. The company also began testing Starbucks kiosks in stores in Tampa and Orlando. A Starbucks opened at the Publix in the Gandy Shopping Center on Tuesday.

Publix has even taken a more active role on social media, using Instagram as a way to inspire clever hashtags for PubSub fans and using the “My Story” function to share temporary videos and photos of Publix events in the community.

The reality is, Publix is facing more competition than ever before. Publix may have saturated the Florida market, but several other supermarket brands are poised to open in Florida for the first time this year while others continue to expand, too. And in order to keep up, and to keep its loyal customer base, Publix is going to have to be more innovative, analysts say.

Organic supermarkets like Whole Foods Market, Trader Joe’s, The Fresh Market and newcomers to Florida, like Lucky’s Market, Earth Fare and Sprouts Farmers Market, are slowly eating away at Publix’s marketshare. Discount grocery brands like Aldi and Save-A-Lot are expanding too, making price point even more competitive. It’s the traditional grocery store format, like Publix, Winn-Dixie and Walmart, that are feeling the pinch at both ends.

Even Winn-Dixie is experimenting with niche stores. The Jacksonville-based grocer has opened a half dozen Fresco Y Mas grocery stores in South Florida market, which cater exclusively to Hispanic communities.

Historically Publix has been a latecomer to most tech savvy advances, including social media. Publix’s official Twitter account went live in 2013, years after competitors like Whole Foods Market and Wal-Mart began using it as a marketing tool. The company was also slow to roll out its online ordering program for the deli and bakery, which began in 2012. In 2015, Publix used the hashtag #MyPublixStory to engage with customers on social media for the first time in the company’s history.

It’s not that Publix hasn’t tried new stuff before. They have but haven’t always been particularly successful. The company lost millions on Publix Direct, an online ordering and delivery service it tested in South Florida and ultimately abandoned in 2003. Publix also experimented with general grocery online ordering over the years but never found a platform that worked. The grocer ended a short-lived online ordering and curbside pickup service at a Citrus Park location in 2012 because there wasn’t enough business to justify the service after 18 months.

But what Publix lacks in digital marketing and engagement, it makes up for in a zealous real estate expansion plan.

Publix will open a smaller store box, at about 30,000 square feet, in downtown St. Petersburg on Feb. 16.

Publix did have some management changes in 2016, which could have contributed to the company’s recent push to pilot new programs. Former CEO Ed Crenshaw retired after 42 years with the company in April. Todd Jones, who had been president of Publix, became the new CEO.

“All of this is a good move for Publix. They’re beefing up the brand,” Green said. “Starbucks will keep customers in the store for a longer time, and people seem to love having a coffee option while they shop. Instacart is part of a cool new trend right now, but it’s still in its infancy and it’s got a long way to go.”

The Rise of Chat Bots and Their Implications for Social Media