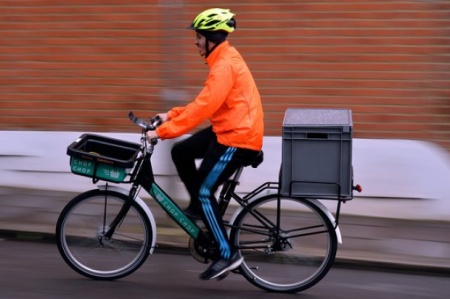 Sainsbury’s is to fight back against Amazon with a one-hour grocery delivery service in London.

The supermarket, which recently bought Argos as part of its efforts to see off the American online retail specialist, has developed an app called Chop Chop, through which shoppers can order up to 20 items to be delivered from a local store within an hour.

Since June, Sainsbury’s has been testing the service in Wandsworth, south London, with groceries delivered Deliveroo-style using bicycles. It is now being extended across south-west and central London areas including Chelsea, Westminster, Fulham, Battersea, Southwark, Wandsworth and Wimbledon.

The supermarket first offered a delivery service by bicycle more than 130 years ago, but the latest effort is part of its bid to fight back against the encroachment of a very modern phenomenon.

Amazon began offering frozen and chilled foods via its Prime Now one-hour delivery service in Birmingham nearly a year ago, and now offers fruit and vegetables for one-hour delivery in a number of cities including London, Glasgow, Manchester and Liverpool.

In June, Amazon launched its Fresh grocery delivery service, which offers fresh fruit, vegetables and meat as well as other kitchen cupboard staples, in London and Surrey. It kicked off the service after Morrisons agreed to supply Amazon with groceries.

The arrival of Amazon has prompted the major supermarkets to up their game by trialling new delivery services.

Sainsbury’s is also testing a same-day delivery service in Streatham and Richmond in London, and Brookwood in Surrey. Customers who order by 12 noon can get their shopping delivered within six hours. Tesco is also trialling same-day delivery in a few locations.

Sainsbury’s said it had recruited a team of 40 cyclists and grocery pickers, all direct employees, to support its one-hour delivery service.

Orders will be picked by Sainsbury’s staff in either the Wandsworth or Pimlico stores and customers pay via the app, which they can also use to track their delivery. If a product isn’t in stock, the store will call the customer to ask if they want a substitute item.

Jon Rudoe, Sainsbury’s director of digital and technology, said: “Speed of delivery is important to some customers, so we have brought back our bicycle service to test demand further.

“In Wandsworth, customers are using the new one-hour delivery service to buy forgotten items, or emergency goods when they cannot leave their home or have invited guests on the spur of the moment.

“If it proves popular, we might introduce it to other areas of London. It complements our same-day delivery service, which is available at selected London postcodes through our online groceries service.”

Wal-Mart in talks to buy stake in Flipkart