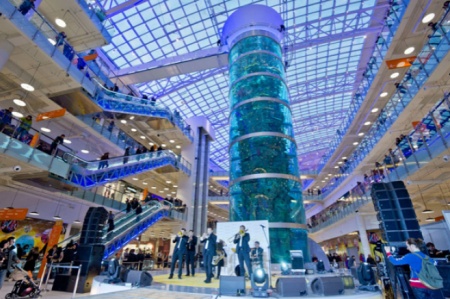 Due to heavy import duties, luxury fashion can be 20 to 30 percent more expensive in Russia than the same items at retailers in Europe, depending on product category. But Tsum, Moscow’s largest luxury department store, adopted a ‘Milan prices policy’ last year, adjusting prices down to attract international customers and make up for the shortfall in domestic spending – a pricing strategy that executives say boosted the department store’s sales by 40 percent.

There has been no such extraordinary uptick in Russia’s provinces because the customer base is exclusively local. But that doesn’t mean people aren’t hungry for international brands in the hinterland.

When faced with the largest country on the planet, it is all too easy for outsiders to equate remoteness with insignificance. That couldn’t be further from the truth, say some Russian market experts.

Irkutsk is one of about 40 cities in Russia with a population over a half million people and many of these are great distances from the country’s fashion centres of Moscow and St Petersburg. Yet luxury brands have found loyal customers as far as away as Vladivostok, the Pacific Ocean terminus of the Trans-Siberian Railway that straddles the Sea of Japan.

Multibrand retailers operating out of Russia’s provincial cities can be roughly split into two categories. Fashion boutiques like Iqons from Chelyabinsk and Irkutsk’s Enigma appeared soon after the collapse of the Soviet Union. After managing to gather enough capital to stay afloat, more opened in Omsk, Irkutsk, Samara and Vladivostok and gathered several loyal international brand partners.

The second category includes multi-brand stores like Volna in Samara and Defile in Vladivostok. These managed to gain enough momentum before the 2008 financial crisis by partnering up with regional real estate developers and oligarchs.

As Russia creeps out of recession, the economy remains in a precarious position. The country continues to face Western sanctions as well as inflation and weak consumer confidence but things are beginning to look up. After a decline of 0.4 percent in the third quarter of 2016, the Federal Statistics Service revealed that Russia’s fourth quarter GDP increased 0.3 percent from a year earlier. The rouble has also partly recovered since the collapse of oil prices.

In spite of tough economic times, the Russian apparel and footwear market has grown at a CAGR of 7.6 percent over the past five years, according to Euromonitor International. The market in 2016 was worth 2.8 trillion roubles (approximately $50 billion). Given that Russia’s provincial markets account for about a quarter to a third of the national market, provincial cities beyond Moscow and St Petersburg could present global fashion brands with an interesting growth opportunity. The provincial Russian fashion market could therefore be worth somewhere in the region of $12-17 billion.

Dina Sultanova is founder of the boutique DNA, located in Ufa, a city with over a million inhabitants in the Russian republic of Bashkortostan. “We have around 500 brand-loyal customers,” she says. “We know all of them, and we know everything about them, from their dress size to their favourite colour.”

This highly personal relationship is one of the only weapons provincial retailers have against the growth of local e-commerce players like Rocket Internet’s LaModa.ru and others.

Euromonitor forecasts a slow recovery of the Russian economy with a caveat of currency fluctuations and a decline in consumers’ disposable incomes. As a result, many middle-income and low-income consumers (which together represent at least 80 percent of Russian society), will remain price-conscious and cautious about spending on fashion.

Many in this demographic could turn to private label or unbranded fashion, creating a mixed bag for international global brands – with some enjoying rising fortunes and others faltering in the Russian market.

The stark divide between the Russian super-rich and the rest of society continues to plague retail development. “This affects our buying activity and the luxury market,” says Lubov Yeltsova, deputy minister of the Russian Ministry of Labour. “We shouldn’t expect any cardinal changes in these factors before 2018, due to several laws signed by the president coming into effect that year.”

Yet the recent economic crisis has served as a powerful stimulus for some kinds of development. In order to find new ways to keep afloat and to modernise, provincial retailers have been forced to become extremely savvy and to do so fast.

Source: The Business of Fashion

Is the Lingerie Market on the Verge of Another Disruption?