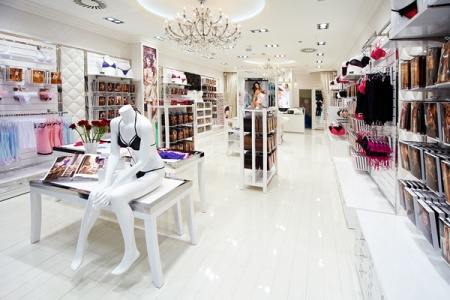 Inside the Aerie pop-up shop in Soho, the body positive, post-Victoria’s Secret message that has become the brand’s calling card since it released its first photoshop-free campaign in early 2014 is perfectly packaged up and displayed on walls covered in bralettes or one-piece bathing suits. “No Retouching. No Makeup. No Problems,” reads one sign, next to a cushion-covered banquette. There’s a yoga studio in the back next to the changing rooms. By the checkout counter, pins reading “Keep it Real!” and “Can’t Retouch This” fill colourful buckets. They are free to shoppers who donate to the National Eating Disorders Association.

Meanwhile, Victoria’s Secret — the goliath which still dominates the lingerie market, worth at least $12 billion in the US alone — has struggled to maintain momentum. Sales decreased 13 percent in March, year-over-year, as the company continues to feel the impact of discontinuing its non-athletic apparel and swimwear ranges in 2016. (The business has since been reorganised around three buckets — lingerie, the Gen Z-targeted Pink range and beauty — and pulled back on promotions).

As Victoria’s Secret has stumbled, a series of disruptive niche lingerie brands — such as Lively, Naja, Negative Underwear and Third Love — have also entered the playing field, peddling a new kind of inclusive, female-centric identity that’s more about the wearer and less about who might be looking at her. They also offer a broader swath of nude shades — serving a wider range of ethnicities — and aim to undercut competitors on price with direct-to-consumer distribution. Mass market brands like Aerie and Madewell, which launched intimates in February, have taken notice. In March, Phillips Van Heusen acquired True & Co, a vertically integrated online brand that prides itself on fit, for an undisclosed amount.

Now, Amazon is entering the market with a private label lingerie brand. The line, called Iris & Lilly has already launched in the UK with a limited assortment of sizes and colours.

Amazon has several advantages. The sophistication level of its data operation allows the company to birth and swiftly iterate its private labels in response to market feedback. And once a label gets traction, Amazon’s scale means it can negotiate the lowest prices from suppliers. Indeed, the company is already offering bras costing as low as $8. (By contrast, Target’s offerings average about $15, while Victoria’s Secret’s average around $40.)

Amazon also has an estimated 63 million registered Prime member households, according to the firm Consumer Intelligence Retail Partners, a group dominated by households earning over $112,000 a year, according to Piper Jaffray, meaning its lines have the potential to gain market share fast.

The question becomes: will Amazon disrupt lingerie’s disruptors before
they have a chance to reach significant scale? And what are they doing
to defend themselves?

Fit is just one of the many challenges of both making and selling
lingerie, specifically bras — the more structured of which can have
anywhere from 18 to 25 components. “It’s probably the hardest product
that I’ve ever had the opportunity to work on,” says Cordeiro Grant, the
founder and chief executive of Lively.

Girald says typical minimums at factories in Asia range from 3,000 to
10,000 pieces per style. “It makes it harder to have broad diversity in
fashion and print as well as the sizes and colours,” she says. Naja
carries between 22 and 32 sizes in each bra, and special patterns are
needed for larger sizes, especially if the bra cups are molded. Cordeiro
Grant agrees: “It’s very SKU intensive.”

Naja owns its own factory in Colombia and controls 80 percent of the supply chain, which has allowed Girald to keep prices on market without sacrificing the brand values that attract customers in the first place. (Naja pays its workers above market wages, and covers their children’s school uniforms and meals, among other initiatives.) But Girald says the company has faced significant pressure to lower prices. “We were looking to capture the market of the non-discount Victoria’s Secret [shopper], but what we found is that the millennial consumer is starting to push prices down,” she says. “Those are our customers so we have to make sure we are not too far out… We’re seeing that the retailers are feeling that push as well.”

The popularity of bralettes has come at a great time for lingerie
retailers looking to appease price-conscious shoppers. For one, they
often come in traditional sizes of small, medium, large, reducing
complexity. “They are a more value-oriented product, sort of cheap and
cheerful, fun fashion,” says Aerie’s Foyle, who adds that the
company also invested in lightly-lined bras without expensive molded
cups. “We really forecasted that the pushup category was looking old,”
she says. “We dominated [with bralettes] first and because of that, we
were able to balance out our [average unit retail] strategy very
nicely.” Cordeiro Grant says the bralette category is here to stay, but
that current growth will plateau at some point. “Skinny jeans are a
mainstay, not a trend,” she says. “I think bralettes are the same way.”

Amazon has a history of tackling complicated and expensive categories,
but will the particular challenges of lingerie prove tricky?

That more mature customer might feel better served by Soma Intimates,
the lingerie retailer known for its wide range of sizes which saw sales
of $345 million in 2016. “Women are willing to pay for solutions that
are comfortable and are going to last with quality,” says senior vice
president of marketing Kimberly Grabel. The retailer, which carried
third-party brands and private label, is parent company Chico’s
healthiest business.

Mark Zuckerberg, the smartphone is eventually going to die