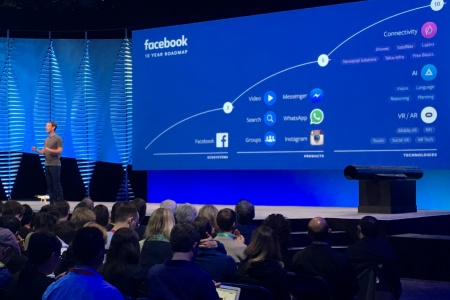 Basically, Zuckerberg’s uses this roadmap to demonstrate Facebook’s three-stage game plan in action: First, you take the time to develop a neat cutting-edge technology. Then you build a product based on it. Then you turn it into an ecosystem where developers and outside companies can use that technology to build their own businesses.

When Zuckerberg first announced this plan last year, it was big on vision, but short on specifics.

On Facebook’s planet of 2026, the entire world has internet access — with many people likely getting it through Internet.org, Facebook’s connectivity arm. Zuckerberg reiterated this week that the company is working on smart glasses that look like your normal everyday Warby Parkers. And underpinning all of this, Facebook is promising artificial intelligence good enough that we can talk to computers as easily as chatting with humans.

For science-fiction lovers, the world Facebook is starting to build is very cool and insanely ambitious. Instead of smartphones, tablets, TVs, or anything else with a screen, all our computing is projected straight into our eyes as we type with our brains.

A mixed-reality world is exciting for society and for Facebook shareholders. But it also opens the door to some crazy future scenarios, where Facebook, or some other tech company, intermediates everything you see, hear, and, maybe even, think. And as we ponder the implications of that kind of future, consider how fast we’ve already progressed on Zuckerberg’s timeline.

We’re now one year closer to Facebook’s vision for 2026. And things are slowly, but surely, starting to come together, as the social network’s plans for virtual and augmented reality, universal internet connectivity, and artificial intelligence start to slowly move from fantasy into reality.

In fact, Michael Abrash, the chief scientist of Facebook-owned Oculus Research, said this week that we could be just 5 years away from a point where augmented reality glasses become good enough to go mainstream. And Facebook is now developing technology that lets you “type” with your brain, meaning you’d type, point, and click by literally thinking at your smart glasses. Facebook is giving us a glimpse of this with the Camera Effects platform, making your phone into an AR device.

The potential here is tremendous. Remember that Facebook’s mission is all about sharing, and this kind of virtual, ubiquitous ” teleportation ” and interaction is an immensely powerful means to that end.

This week, Oculus unveiled “Facebook Spaces,” a “social VR” app that lets denizens of virtual reality hang out with each other, even if some people are in the real world and some people have a headset strapped on. It’s slightly creepy, but it’s a sign of the way that Facebook sees you and your friends spending time together in the future.

And if you’re wearing those glasses, there’s no guarantee that the person who’s taking your McDonald’s order is a human, after all. Imagine a virtual avatar sitting at the cash register, projected straight into your eyeballs, and taking your order. With Facebook announcing its plans to revamp its Messenger platform with AI features that also make it more business-friendly, the virtual fast-food cashier is not such a far-fetched scenario.

Sure, Facebook Messenger chatbots have struggled to gain widespread acceptance since they were introduced a year ago. But as demonstrated with Microsoft’s Xiaoice and even the Tay disaster, we’re inching towards more human-like systems that you can just talk to. And if Facebook’s crazy plan to let you “hear” with your skin plays out, they can talk to you while you’re wearing those glasses. And again, you’ll be able to reply with just a thought.

If we’re all living in this kind of semi-virtual world, it makes Facebook key to every interaction, and crucially, every financial transaction we conduct in that sphere. It could make the company a lot of money, certainly.

So yes, while it’s still at least a decade off, this is all happening, little bit by little bit. But with Facebook facing fresh questions every day for its role in our personal lives and our political elections, it’s also important to remember that much of this gives the social network — as well as companies like Apple, Google, and Microsoft which all pursuing the same ends — unprecedented control over our conceptions of reality. It’s time to ask these questions now, and not later.

Is the Lingerie Market on the Verge of Another Disruption?

How to Target Luxury Consumers in Three Steps?