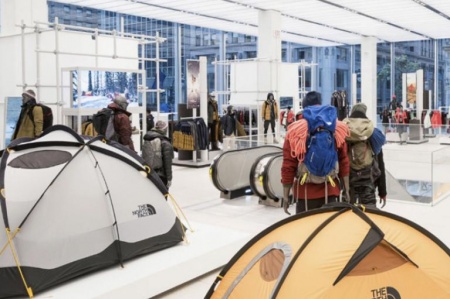 The retailer, a division of VF Corp., is opening a two-level, 20,000-sq.-ft. flagship in the old Manufacturers Trust Company building, a New York City landmark of modernist architecture.

Though the canyons outside the expansive windows on the second floor of store are formed by skyscrapers and not rock bluffs, North Face’s VP of direct-to-consumer retail Erik Searles finds the airy atmosphere a fitting backdrop for the high-end camping and climbing gear on display.

“This is our biggest full-price brick-and-mortar store outside of Chicago and Anchorage, and it is meant to showcase the North Face brand,” Searles said during a pre-opening tour he gave to Chain Store Age. “We expect people to walk into the store and experience how they will engage with North Face in the outdoors.”

The store offers an immersive brand experience including an interactive climbing wall, community seating and a custom embroidery service called “Lot, Stock and Barrel.” The service is likely to engage passersby on busy Fifth Avenue as the first thing one sees in the front window when approaching the shop from the north are embroiderers on sewing machines weaving intricate designs into down jackets and the like.

“We have 20 designs we’ve created that can be sewn into the garment without compromising its functionality,” Searles said. “We want people to be able to customize the product, to go a little wild with it.”

The retailer was not allowed to make any changes to walls or floors in the building because of its landmark status. But it is capitalizing on the situation by treating the space like a natural outdoor setting and using it to display its gear as it would in the wild. To that end, the second floor will feature a “base camp” patterned after the kind set up by top climbers and a “campsite” where visitors can relax with a cup of coffee and access Wi-Fi. Fitting rooms sit mid-floor and are constructed of pipe and the same fabric used in North Face tents. “You’ll come up the escalator and you’ll feel you’re in the outdoors,” Searles said. To ensure the brand-authentic experience, most of the items in the store were created using the same high-quality materials that North Face products are designed with. The fitting rooms, for example, are constructed of the same fabric and nylon and aluminum poles used to make North Face tents.

North Face will debut its new high-performance Summit Series merchandise line at the store, and intends to use the high-profile New York platform to debut other new products as they emerge.

The retailer signed an eight-year sub-lease for the space with previous tenant Joe Fresh, an apparel brand owned by Canadian grocer Loblaw Companies.

The brand entered the United States in 2012, opening freestanding stores and in-store shops at J.C. Penney. But Joe Fresh never gained traction with U.S. shoppers, and the company shuttered its last U.S. store in spring 2016. The store’s design was a collaborative effort design between SET Creative, New York City, and North Face.

Is it even possible to sell “luxury” on Amazon?