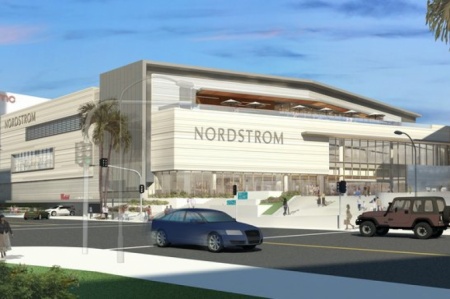 In LA, Nordstrom has decided to move from the Westside Pavilion into a more upscale mall with newer eateries, including the likes of Mario Batali’s popular Eataly, and amenities such as parking services (both digital and physical) designed to take friction out of mall-based shopping.

But the retailer has paid attention to its own concepts as well. At Century City Nordstrom is featuring — along with more natural light and a new approach to plus sizes — two shops curated by Olivia Kim, Nordstrom’s vice president of creative projects. Those shops include the fifth ‘Nordstrom x Nike’ sneaker boutique, a women’s lifestyle concept blurring the lines of fitness and fashion, and SPACE, a Kim-originated boutique featuring advanced and emerging designers like Roksanda, Acne and Marques’Almeida.

“We want to make a statement with our stores in these markets and identify them as destinations for fashion, style, art and culture,” Kim said last year while announcing the expansion of the store-within-a-store concepts. “Our customers are really curious and educated about fashion, and part of our goal … is to create a platform to introduce our customers to this side of designer fashion — this place where the directional collections or up-and-comers have a place to live and grow.”

Just down Santa Monica Boulevard from the Century City store, the new “Nordstrom Local” concept is along the lines of Bonobos’ “guideshops,” which don’t have inventory for purchase but allow customers to check out and try on garments and order online. While the 3,000-square-foot space (tiny compared to the retailer’s 140,000-square foot flagship stores) will have no apparel to buy on site, the personal stylists on hand can fetch items from nearby stores or order them online, according to the report.

Are hotels the new frontier in experiential retail?