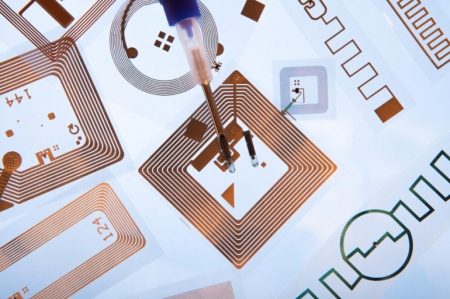 Louis Vuitton bags, Gucci shoes, Burberry coats—you name it, it’s been the target of theft. Luxury houses are especially prone to having their items stolen and sold on the black market because luxury items have become synonymous with status. Retail theft in general costs the industry nearly $32 billion a year. But a new, undetectable radio frequency identification (RFID) tag could change things.

A U.K.-based company, Advanced E-Textiles, is making thread-sized microelectronic RFID tags. The tag—basically a washable, wound-up electronic barcode in thread form that can be read by radio waves—would be sewn into the garment by the manufacturer. When a consumer purchases the item, they would be unable to detect the tiny tag when wearing it.

“Current RFID tags are difficult to manufacture and incorporate into textiles because they’re bulky and they don’t guarantee washability or durability,” says Dr. Anura Rathnayake, founder and CEO of Advanced E-textiles. “They are also easily recognizable, hence making the garment more vulnerable for theft.”

Rathnayake’s idea is that these undetectable threads could track the lifecycle of a garment, contain information about the garment’s fiber contents and age, and where it was bought. Once a consumer outwears the garment, they could return it to the brand’s retail store for recycling. The old threads can be spun into new items, eventually reducing production costs and waste. Consumers who care whether their goods are stolen or counterfeit could take the garment into a brand’s retail store and have it scanned to see its history. If no RFID tag is detected, the garment would be presumed fake. If the garment is shoplifted or if a cargo crate goes missing, the thief would have to disassemble the item to find the tag, making it a more expensive operation.

Forrester retail analyst Sucharita Mulpuru thinks the potential is there for mass retail adoption, as companies like Zara, Kohl’s, and Macy’s are already investing in better RFID technologies. More than half of U.S. retail chains have RFIDaccess control and tracking systems within their stores, and nearly all will in the next few years—RFID technology has proven to be a competitive differentiator. The RFID industry itself may be worth as much as $18 billion or more by 2026.  ”If there are better, cheaper processes than what’s already in use, I think lots of retailers would consider it,” says Mulpuru. ”There isn’t a tag quite like this as of yet.”

However, Mulpuru cautions that, at the tag’s current price of a few dollars, it wouldn’t be an easy sell for larger retail companies that aim to keep costs low. “For a few dollars added to a garment to be negligible, the garment would need to cost several hundred dollars—only for luxury retail brands, would that be viable.” As well, she notes, the manufacturing process would need to be adjusted, which would take time and money.

The threads are set to launch in early 2017, and already there’s interest from fashion companies. However, Rathnayake is aware that his thread is too costly for most retail brands outside of the luxury goods market to use at present. But he’s confident that once luxury retailers get on board, he can drive manufacturing prices down to a cost that wouldn’t break the bank for larger operations.

“To make Advanced E-Textiles’s effort truly meaningful, all garments would need these integrated RFID filament tags. In a bigger picture, these integrated RFID tags would be an all-in-one solution to enhance the life cycle of the garment, automate corporate recycling, and protect brands against losses.”

Kroger has a new plan that should terrify Walmart and Target