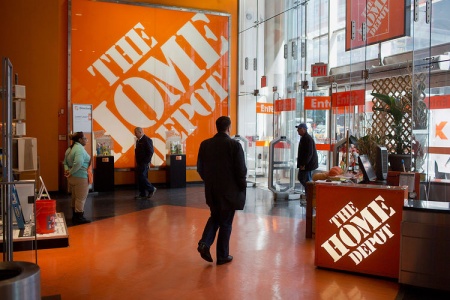 Home Depot Inc., the world’s largest home-improvement retailer, posted second-quarter profit that rose 9.3 percent and boosted its earnings forecast for the year as Americans continued spending on their houses.

Net income increased to $1.97 a share in the fiscal second quarter, which ended July 31, the Atlanta-based company said Tuesday in a statement. That matched analysts’ average estimate.

The results reinforced that consumers are still willing to splurge on fixing up their dwellings, spurred along by rising home values. Chief Financial Officer Carol Tome said on a conference call with analysts that Home Depot is “very pleased” with its August sales so far and that the company has confidence in the second half of the year.

“We are fortunate in that we are in a space where the customer is willing to spend,” Chief Executive Officer Craig Menear said on the call. “That’s clearly being driven by the dynamics that exist in the housing market.”

Home Depot said profit this year will be $6.31 a share, up from its previous forecast of $6.27. Analysts estimate $6.34, on average. The company reaffirmed its projection that sales will rise about 6.3 percent.

Home Depot’s second-quarter sales rose 6.6 percent to $26.5 billion, in line with analysts’ projections. Sales at Home Depot stores open for more than a year increased 4.7 percent, down from the previous quarter’s 6.5 percent gain, but matching analysts’ average estimate, according to Consensus Metrix.

Home prices in 20 U.S. cities rose less than projected in May from a year earlier, according to S&P CoreLogic Case-Shiller data released last month. The 20-city property values index increased 5.2 percent from May 2015 after climbing 5.4 percent in the year through April. Analysts’ had estimated 5.5 percent.

Investors will get more insights into the strength of the home-improvement market on Wednesday, when Lowe’s report its second quarter. Analysts expect its same-store sales to gain 4.1 percent.

“U.S. housing is still probably OK in the broad sense, but the boom in home improvement from that appreciation seems to have slowed a bit in the second quarter,” said Seema Shah, an analyst at Bloomberg Intelligence.