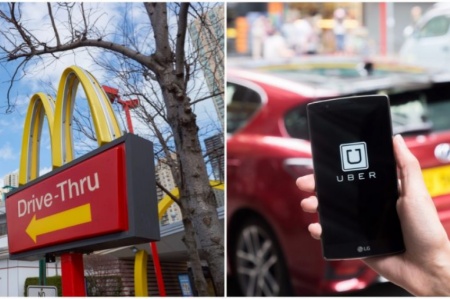 McDonald’s said Wednesday it has expanded delivery via UberEats to about 270 restaurants in Chicago and about 700 more nationwide, a move aimed at winning back younger consumers willing to pay more for food brought to their doors.

“McDelivery” is also now available at about 300 restaurants in Los Angeles, 144 in Phoenix and 59 in Columbus, Ohio. McDonald’s started testing delivery in several Florida cities in January, and said last month it planned to roll it out “to a number of U.S. cities this quarter.”

Delivery is a tricky proposition for McDonald’s. UberEats’ delivery charge is $5, more than nearly all of the chain’s menu items. There’s also the risk that a customer might be disappointed with soggy fries or a warm soft drink.

But McDonald’s executives say that delivery is successful because the huge number of locations — it has 14,000 nationwide — doesn’t leave much room for the food to get cold.

“When we first started considering delivery, food quality was our top concern,” said Bill Garrett, McDonald’s vice president of global delivery. “But when you look at our real estate footprint, we are so close to so much of the population, delivery times are very tight. We’re getting great reviews (of the food).”

Nearly 75 percent of the U.S. population lives within three 3 miles of a McDonald’s restaurant, according to the company.

Delivery also has the possibility of jamming up restaurants at peak times, slowing down service. But Nick Karavites, a McDonald’s franchisee who operates 22 restaurants throughout the Chicago area, said the systems put in place behind the scenes ensure that orders stay organized and don’t sit too long. Much like curbside pickup, which McDonald’s plans to roll out later this year, Karavites said delivery orders won’t be made until an UberEats driver arrives, ensuring the food is fresh and hot.

“We’re talking about a customer that was going to stay home that day,” he said. “We’re widening the net to be convenient to more people.”

The world’s largest burger chain believes that “McDelivery” is a critical piece of its plan to win back lost customers. McDonald’s said the other keys to improving traffic also involve technology: The chain is rolling out mobile ordering by the end of the year, and renovating its restaurants to add ordering kiosks and table service.