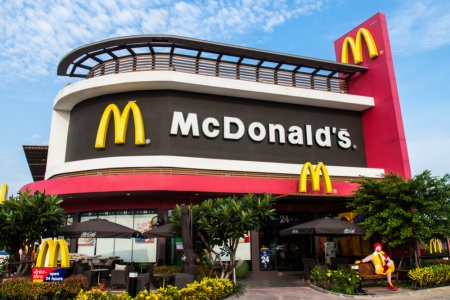 McDonald’s is betting on new tech like mobile orders and payments to halt an exodus of U.S. customers that has seen store visits fall by 500 million since 2012.

The hamburger giant unveiled plans at its annual investor day to make “mobile order and pay” available at all of its roughly 14,000 U.S. restaurants by the autumn. McDonald’s will also finally introduce delivery, giving in to a long held demand from patrons who have drifted to rivals in recent years.

“Through enhanced technology to elevate and modernize the customer experience, a focus on the quality and value of our food and redefined convenience through delivery, we have a bold vision for the future and the urgency to act on it,” McDonald’s CEO Steve Easterbrook told investors and Wall Street analysts at the meeting, which was webcast from Chicago.

Still, the initiative shows how McDonald’s has been a tech laggard: mobile ordering and payments are well established options at rivals like Starbucks (sbux, +0.20%), Panera Bread (pnra, -0.13%) and Domino’s Pizza (dpz, -0.26%). And this week Wendy’s announced it was introducing self-service order kiosks at 1,000 restaurants. McDonald’s conceded in a press release it “didn’t keep pace with” customer expectations that have risen as they patronize other fast-food chains.

To win back those customers, McDonald’s is spending about $1.7 billion this year, about two-thirds of which will be spent on existing stores, including new tech. Some of that will go to radically overhauling about 650 restaurants in 2017 to meet what it calls its “Experience of the Future” look, with the goal of having most free-standing U.S. restaurants done by the end of 2020. More McDonald’s restaurants will have computerized kiosks that allow customers to place orders and skip the front counter altogether.

As for delivery, McDonald’s executives pointed out that in key mature markets like the U.S., France, Britain, Germany and Canada, some 75% of people live within three miles of a restaurant, allowing it to use its network to bring food directly to customers’ homes.

When the company in January reported a comparable sales decline of 1.3% in the U.S. for the fourth quarter, it re-ignited fears that it was heading for another period of stagnation after something of a comeback. That renaissance had been spurred by the launch of All-Day Breakfast, putting pressure on McDonald’s to show it had more than one move it could use.

While McDonald’s has been testing a million ideas, including the use of kale in some salads, one executive suggested McDonald’s would eschew such experiments in the future to focus on its core items and said it “will never chase concepts” that don’t play to its strengths.

Why Net-a-Porter wants to sell through WhatsApp