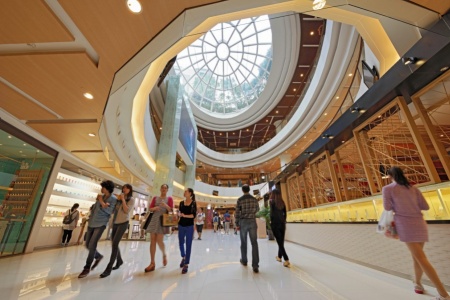 Shoppers braving the mall this holiday season may notice more that’s new than the day’s discounts.

Many mall owners are spending billions to add more upscale restaurants and bars, premium movie theaters with dine-in options, bowling alleys and similar amenities. Some have turned swaths of space that previously housed department stores over to health clubs and grocery stores. Others are undergoing no less than a ground-up transformation to make room for office space, hotels and apartments.

The trend has been gaining traction as the companies that operate malls look for ways to keep people coming in at a time when Macy’s, Sears and other big department store chains have shuttered hundreds of stores and consumers increasingly opt to shop online.

Carving out space for movie theaters, videogame arcades and food courts isn’t a new strategy. What’s noteworthy is the degree to which mall owners are now counting on tenants that sell experiences, rather than physical goods. The share of space occupied by non-retail tenants at regional shopping malls reached nearly 13 percent last year, according to commercial real estate tracker CoStar. It was 10.5 percent in 2012.

Since 2014, about 90 large U.S. malls have invested more than $8 billion in major renovations, according to a study by commercial real estate firm JLL. Some 41 percent of the malls in the study spruced up their food and beverage offerings with an emphasis on restaurants that serve more varied fare and, in some cases, alcohol.

Westfield’s Century City mall in Los Angeles has spent $1 billion to add more than 400,000 square feet of retail space. The renovation included a swanky outdoor dining plaza with gourmet restaurants and cafes. It also added the first Eataly on the West Coast. The Italian food market, which houses a variety of restaurants, drew an average of 3,600 people a day during its opening weekend.

Among the malls in the JLL study that improved their food and beverage options, more than half also invested in adding entertainment options.

The Kingston Collection in Kingston, Massachusetts, added a 36,000-square-foot bowling alley a year ago. Mall shoppers can also go there to play laser tag, try out summersault basketball dunks at an indoor trampoline park or race go-karts.

Shoppers who haven’t been inside a mall since the last round of holiday shopping may notice fewer department stores and clothing chains. Among the retail chains that announced store closures this year are RadioShack, Payless, Wet Seal, J.C. Penney, Kmart, Guess, Macy’s and Sears.

Retailers have been generally closing weaker locations, although some companies such as Macy’s are shuttering stores that are too close to their other locations, according to CoStar data. And the majority of stores that Sears, Macy’s, J.C. Penney and Kmart closed were located in middle-range or lower-tier malls that typically generate less money per square foot than the most upscale malls.

The closures are one reason mall owners are increasingly making room for other types of tenants, including hotels, apartments and grocery stores, said Mizuho analyst Haendel St. Juste.