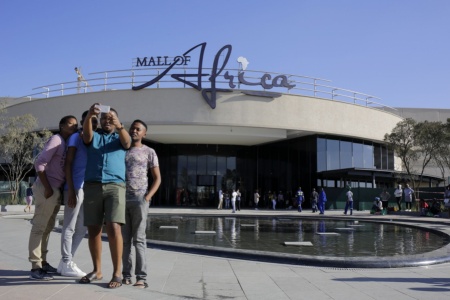 South Africa is now home of the massive Mall of Africa, one of the continent’s biggest shopping centers, boasting 300 stores and restaurants across 131,000 square meters (1.4 million square feet) of property.

South Africans met the mall’s April 28 opening with equal doses of delirium and disdain. More than 400,000 people visited in its first five days of operation—drawn by offers of cash vouchers, sales, and special events. “We didn’t expect that many people,” says the mall’s manager Johann Fourie. “I underestimated the power of social media.”

South Africa is already seventh in the world—and ahead of Europe—in shopping center space, according to 2013 numbers from retail research group Urban Studies and now has roughly 2,000 shopping centers for its population of 53 million. It’s also in an economic slump, spurred by a drop in commodity prices, 25% unemployment, political uncertainty and rising interest rates.

Mall of Africa, which began building during a boom time for malls, will have to confront these risks head on.

“When this was planned a couple of years ago, not most of these factors were so known,” says Fourie. But, he adds, “if I look at what’s happening around us, as bad as the economy is, people are still—I don’t know why—but they are still really spending money.”

Mall of Africa cost an estimated 5 billion rand ($332 million) to build and is co-owned by South African real estate capital growth fund Attacq and property developers Atterbury. The property is part of Waterfall City, a sprawling residential and commercial development that will be built out over the next decade and aims to rival Johannesburg’s central business district and the nearby upmarket residential and office neighborhood Sandton in size.

Attacq CEO Morné Wilken described the mall in a recent interview as a “tipping point” for the area.”I do believe it will create further opportunities for development,” he says. “The real thing we want to develop is a new city around this [mall].”

Waterfall City’s developers are hoping to attract corporations that want to consolidate their Pretoria and Johannesburg headquarters in a central location, and have already secured Price Waterhouse Coopers as a nearby anchor tenant, with a 25-story building scheduled to open in February 2018.

The space that opened late last month—almost fully rented out with international brands like Starbucks, Häagen-Dazs, Zara, H&M, and Armani Exchange scattered amongst local brands—is the first phase in the shopping center’s development, with a second, 30,000-square-meter (320,000-square-feet) building in the works, according to Fourie.

The mall is hoping to attract young families with its large, outdoor park—complete with water features—and, indoors, a flowing design with high ceilings and plenty of natural light. “The feeling is it’s open, spacious, it’s big; it’s not that typical, enclosed claustrophobic feel,” Fourie says. “That definitely makes a difference.”

Shopping centers have traditionally provided a safe, variety-packed space for South Africans in urban areas with high crime rates and limited public spaces to spend time. This holds huge appeal for people of all races—with the result that malls are often the most desegregated spaces in the country, which still struggles with incidences of racism, 20 years after the end of apartheid.

Strong economic growth, a well-developed formal banking sector, and a flood of new consumers into the market since apartheid’s end has also helped malls succeed, says Urban Studies director Dirk Nico Prinsloo. “The shift from informal to formal retail has been substantial and has been strong.”

These factors, combined with the country’s strong mall culture, have helped the country’s megamalls, several of which count more than 100,000 square meters (1 million square feet) of retail space, weather the ups and downs of the local economy.

Walk through the retail spaces in Johannesburg’s wealthier suburbs today, and you’d be hard pressed to find evidence of the economic pressures currently plaguing the country.

Malls attract crowds on a daily basis, and newly launched American standards such as Krispy Kreme and Starbucks are still attracting long lines weeks after opening. Online shopping hasn’t yet taken off in the country, leaving brick-and-mortar stores relatively untouched; an estimated 40 new shopping centers are planned or currently under construction across the country.

“Consumer spending is our Wiley Coyote,” says Mike Schussler, the chief economist at Economists.co.za. While spending on houses, cars, and other durable goods has faded somewhat, retail and other sectors like fast food and hardware are still going strong.

Eventually, “the South African consumer is going to be under pressure,” Schussler says. But he argues that the spending power of South Africans abroad and of visitors to the country shouldn’t be underestimated. “I think we forget how many South Africans are outside of the country, sending money home,” he says.

The mall has mitigated some of the economic risk, Fourie says, by ensuring the presence of stalwart “big box” retailers and by limiting the number of restaurants, which are often the first to go in a recession. They’ve also avoided first-time traders, which pose a risk if the economy sours, he says.

To deal with cash heists, one of the biggest issues plaguing South Africa’s malls, the company is installing a cash recycling system, sending spent money into an on-site vault and distributing it back to transaction centers. More than a dozen generators are on standby to deal with the country’s frequent power cuts, and the mall will have environmental offsets including solar panels and water recycling.

Then, there’s Africa’s wealthy, who already flock to the upscale Sandton City shopping center, a short distance from Johannesburg’s main airport using the high-speed Gautrain, to shop international brands. Mall of Africa, located on a Gautrain shuttle bus route, plans to take advantage of these spenders.

Waterfall City’s developers aim to build out 20,000 residential units in a five-kilometer (three-mile) radius around Mall of Africa in the next eight years. Some 3,000 already have been built, according to Prinsloo. The fact that new development already is being planned around the mall, and that the nearest large shopping center is miles away, might help buffer the mall from retail pressures in the years to come, he says.

“There’s definitely going to be centers that are going to struggle over the next five years, especially those located in the ‘greenfield’ spaces that were developed based on the expectation of future growth,” says Prinsloo. “That’s definitely not Mall of Africa.”