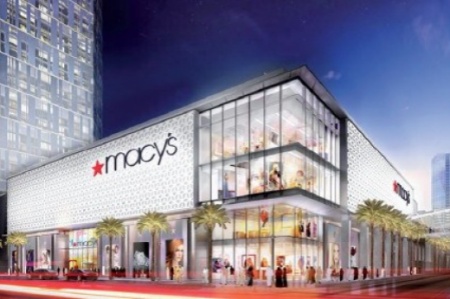 Macy’s is emerging from a four-year, $400 million renovation of its Manhattan flagship store, adding 100,000 square feet of new retail space, a sixth-floor Italian restaurant, and a floor just for millennials.

Macy’s has been working to overhaul its aging stores for the past few years. The four-year renovation of its marquee location in Herald Square is the centerpiece, but the company is also spending $100 million to renovate its Brooklyn store over the next three years. It is upgrading its jewelry department and testing a pilot concept for its shoe department. Hoguet said the company is looking at the “health and wellness arena” as a way to get people into stores, too, though she did not provide details on what that might entail.

An additional testing ground is the newly opened basement floor at the Macy’s flagship location. Dubbed One Below, it’s a 53,000-square-foot playground for millennials, complete with “selfie walls” and touchscreens. While it’s impossible to section off such a large space at a regular suburban Macy’s, the retailer plans to take parts of One Below and integrate them into its fleet.

Macy’s has about 770 stores but is in the midst of culling 40 under-performing locations. Executives are funneling investment into the 150 top stores, redesigning entire departments and adding new technology. The top 30 locations, which Macy’s calls its “platinum doors,” receive the most attention.

Department stores have experimented for years in an effort to adapt to a new, digital age of shopping, aiming to give customers a compelling reason to get off their couches and trek to a store. Highlights have included: the digital dressing room at Rebecca Minkoff, the yoga classes at Lululemon, the rare merchandise at a vintage shop. The very role of a department store in American shopping—a massive emporium to peruse and buy all kinds of non-essential items—is at risk as the population flocks to specialty retail shops.

The most prominent—and notorious—revamp occurred at J.C. Penney in 2012, when then-Chief Executive Officer Ron Johnson totally overhauled the retailer’s stores, trading the traditional department format for a sea of branded boutiques. He replaced cash registers with coffee and juice bars, bought 55,000 mannequins to place everywhere, and put down slabs of concreteto create streets that led to hang-out areas called “Town Squares.”

It didn’t work. In fact, it failed horribly. Sales went into free fall as shoppers abandoned J.C. Penney. Johnson was ousted after 18 months, and the 114-year-old retailer is still recovering.

One success at J.C. Penney, however, are its Sephora shop-in-shops. Macy’s moved to replicate this take on the beauty department by acquiring spa and beauty chain Bluemercury for $210 million in 2015. Essentially, Macy’s is taking an established specialty outlet, shrinking it, and sticking it inside the larger store.